Sheppey United’s first home game of 2021 – and on their new pitch, was celebrated with a one-nil victory over Fisher. 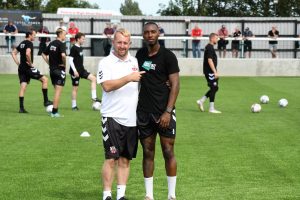 Manager Ernie Batten made a few changes to the team that defeated Tower Hamlets the previous weekend. Injury ruled out Junior Aikhionbare whilst James Jeffrey and Luke Carey had to make do with a place on the bench. Coming in for the trio were club captain Jack Midson along with wingers Renford Tenyue and Taurean Roberts.

Both teams set-out with solid formations built around protecting their goal – The Ites again choosing to play Howlett-Mundle in an anchor role from midfield. For their part, Fisher were very quick to close-down the Ites forwards, in particular the wide men.

In a tight first half chances were limited with Sheppey managing to force a corner on 7 minutes but it was headed out and away by Fisher. At the opposite end, goalkeeper Adam Molloy watched a free-kick from the left sail over his crossbar.

With 11 minutes on the clock, a slick interchange between Bennett and Midson teed-up Roberts who produced a save out of goalkeeper Dan Carpanihi. Fisher then won a corner on 17 minutes which Midson initially headed away and the ball eventually working its way to Molloy to gather.

A little past the half hour mark Roberts dazzled down the left channel to win a free kick – Bennett swung over and in-swinger which Midson, under pressure from a marker headed over the bar. Sheppey’s aerial threat was again demonstrated on 41 minutes when Lex Allan headed against the crossbar.

Just before half-time a half chance for Fisher sailed over Molloy’s goal and into the Queenborough Road End. 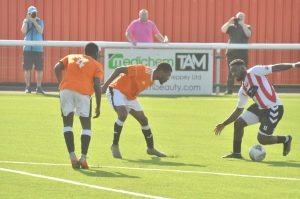 It was again a tight affair once the game resumed and the Ites were twice caught offside before manager Batten made a change. Having identified the need to jig the formation he introduced forward Jeffrey in place of midfielder Freeman.

Two minutes after the substitution the Ites scored! A corner on 58 minutes was headed out for Roberts to cross the ball back into the box – Tenyue then shot through a crowded goalmouth which Carpanihi parried in the direction of Ashley Sains to stab home for 1-0.

Jeffrey won a corner with an hour of the game played which Fisher dealt with, and ten minutes later a Roberts cross was clutched out of the air by Carpanihi with Midson ready to nod in. Batten then made two further changes with Hagan and Griffiths introduced in place of Midson and Tenyue.

The Ites last chance came on 87 minutes when a Fisher was corner cleared. Howlett-Mundle calmly distributed the ball into the path of Roberts who set-up Griffiths who shot wide of the near post. 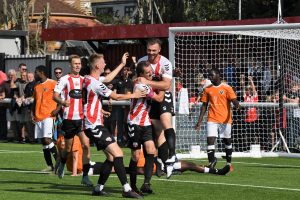