AN OPEN LETTER FROM MARCEL NIMANI

A huge congratulations to the club for a historic season.
After three seasons, I’m extremely proud to have achieved everything that we set out to do;
Sheppey United FC representing this wonderful Island in the Isthmian League.

Following from a recent development at the club of which on this occasion did not represent my views, after a serious of thoughts and reflection, I believe now is the right time for me to move on – this has been an extremely difficult decision, and whilst heavy hearted, I leave the club in a better place and personally leave the club as a better and more experienced person and for that, I am eternally grateful to the club.

I would like to thank everyone at the club from the stewards, club staff and of course, the ever so kind ITES fans for making me and my family feel at home.

An extended thank you goes to the people that I worked with the closest, The Chairmans
Matt Smith and Gary Seamark – two fantastic people who drive the club in the right direction, as well as Ernie Batten.

Over the last three years, I’ve had the opportunity to coach some of the regions finest Gentlemen.
Thank you to all the players, you have all been a joy and a delight to coach – you are the true champions.

Lastly, ‘my gang’ of coaches that I’ve had the pleasure to work alongside in this journey; Craig Coles, Lee Allen, Jack Midson, Kieran Gooding, Mike King & Josh Hall- thank you Gentlemen- it has been honorary and educational.

To everyone associated with the club, I wish you all generation after generation of success.
UP THE ITES – Marcel

Joint Chairman Matt Smith had the following to say, “I was extremely disappointed to receive Marcels resignation and tried everything in my power to keep him at the club. This is a sad day for everyone at the football club given Marcels organisational skills and positive impact since coming in to the club three years ago.
Marcel has become a friend to me as well as an assistant manager and I wish him well in his footballing journey. During his spell at the club we have seen our most successful season winning four trophies last term, Marcel and the coaching team were instrumental in that success.
As Joint Chairman and following this resignation I shall speak with the committee and make further announcements during this coming week.” 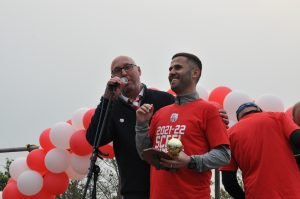 Next Story:
NEW DIRECTOR OF FOOTBALL