Defender Matt Parsons has agreed terms with Sheppey United ahead of the 2022/23 season to added more depth to the defensive options. 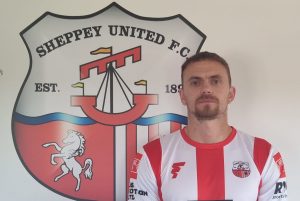 Left back Parsons is no stranger to the Ites having played as a trialist at the club during the 2021/22 pre-season before he signed for Glebe.

Parsons graduated from the Crystal Palace Academy to sign his first professional contract with Crystal Palace in April 2010.He made his first team debut in the League Cup Second Round on 24 August 2010, replacing Edgar Davids 82 minutes into their 1–1 draw with Portsmouth at Fratton Park, his team losing 4–3 on penalties. He made his first league appearance the following January, playing the full game and impressing fans in a goalless draw with Norwich City at Selhurst Park.

He joined Barnet on loan in March 2011. The following season Parsons went on to play six times in all competitions for Crystal Palace and on 30 August 2012, he joined Wycombe Wanderers on loan for an initial one month youth loan deal, making 4 appearances. Come the 17th January 2014, Parsons joined Plymouth Argyle for an undisclosed fee until the end of the 2013–14 season where he played on 10 occasions.

Parsons then dropped out of the football league and has played for clubs including Chatham Town, Erith & Belvedere and Cray Valley Paper Mills. To hear what our new attacking left back had to say click below.

Want to sponsor Matt Parsons next season? For a fee of £100 you will get:

Next Story:
AN OPEN LETTER FROM MARCEL NIMANI