ANALYSIS GOES FROM STRENGTH TO STRENGTH WITH THE ADDITION OF MACI

Sheppey United have doubled their analysis team with the addition of Ben Maci who joins the first team squad in the role of Player Performance Analyst. 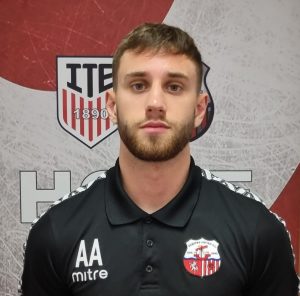 Ben is no stranger to Assistant Manager Marcel Nimani who had this to say, “Ben is a recent Sport Coaching graduate from Brighton University who I have known since his teenage days as an ex-student of mine.

“Ben is a football junkie and has a great eye for player stats and his level of details is not only impressive but very helpful for both staff and the players themselves.

“Ben will be an excellent addition to our already established teams stats focus and will work with Lee Allen where the two of them will feedback regularly as we look to improve on all fronts ready for next season – Welcome to the management team Ben.”

We asked Ben for some details about himself and how the move to the Ites happened. “My name is Ben Maci and I’m 21 years of age and I have just graduated from the university of Brighton with a degree in sports coaching. During my 3 years there I stumbled across performance analysis (PA).

“As soon as I began working within the field I fell in love with it and it catered to my strengths. I grew up wanting to be a footballer like most young people – However I found out pretty quickly that as good as I thought I was, making it a full-time occupation was never on the cards.

“However I didn’t let that discourage me from working within football. Hence why I went on to get my GCSEs and A Levels and eventual degree in sports coaching.

“Once I had left university which was just over a month ago now I spoke to a friend of mine who has played for an array of clubs in the semi-professional pyramid. I asked the question on performance analysis within semi pro football and if he had played for any clubs that had an analyst on board. He mentioned Sheppey United and raved about the professionalism and ambition of the club. So I reached out to Marcel who was my PE and sports science teacher at A-Level asking if I could come in and work with the analyst on board (Lee Allen). He kindly granted me the opportunity and I was in on the first day of pre-season and here we are.

“Despite my short time here I’ve had an exceptional experience. I couldn’t have asked for a better group of players or staff to work alongside. Their professionalism and ambition to keep striving forwards motivates me to match there efforts and provide further benefit to an already extremely successful club.”

Lee Allen now moves into the role of Head of Digital Analysis where Ben will report directly into him. Lee said, “The players were very complimentary of the team stats and studies we produced last year, by adding Ben to our team I can still focus on that whilst Ben will be looking at specific players with certain objectives.

“Although we’ve only been working together for a few weeks we already have a great relationship and the reports Ben has produced already are very detailed and will enable us to further strengthen on the field.”

Lee will also continue in his role as Communications Director where he will head up all the social media activity.  Paul Weekes has also kindly volunteered to help with social media updates during matches when Lee cannot do this whilst he concentrates on other first team matchday duties.

Next Story:
MESSAGE FROM THE CHAIR – Matthew J Smith