ITES A PERFECT FIT FOR DAVID

Forward Nickal-David Luzolo has agreed terms with Sheppey United ahead of the 2022/23 season to added more depth to the attacking options. 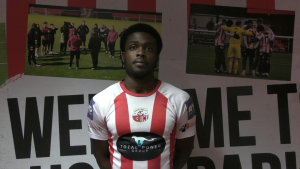 Young forward “David” was part of the Ebbsfleet United FC U19s team during the 2018-2019 season where he netted 17 goals, provided 4 assists in 25 appearances. That led to a trial with then football league side Tranmere Rovers before David then played for Heybridge Swifts.

Last season David had a brief trial at the Ites and appeared as a substitute away at Kennington in the SCEFL Challenge Cup before he secured a move to Fisher FC. In the SCEFL David was a hit with Fisher, producing 5 goals in 10 games. Asked by Ernie Batten to attend pre-season with the Ites, David scored as a substitute in the friendly game against Kennington.

David was glad to finally be part of the Sheppey United squad, “There’s quite a few reasons why I chose to sign for Sheppey to be honest. Just just to name a few, one is because of the level of interest the gaffa & the club showed in me. They believe in my ability & potential to help the club move forward which is a huge confidence boost.

“Another is what they provide me in terms of development, i.e. the facilities, great coaches & atmosphere to play around. The style of play attracts & suits me. As well as the quality, standards and ambitions of the club to go to that next level is important.

“I’m buzzing that I’m here and I’m looking forward to having a great season with this team!” 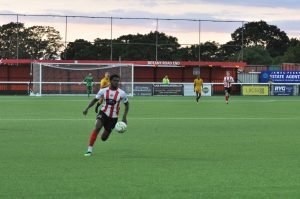 Want to sponsor Nickal-David Luzolo next season? For a fee of £100 you will get: