Central defender Lekan Majoyegbe has agreed terms with Sheppey United ahead of the 2022/23 season. 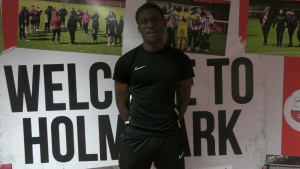 Towering defender Lekan joined up with the Ites for pre-season training and played the first 45 minutes in last nights 5-0 win over Kennington. The promising 20 year old joins the Ites following spells at Margate and Corinthian.

Assistant Manager Marcel Nimani was glad to get the defender signed,”Lekan is a young prospect and whilst still young he is showcasing potential – and the ability to be a key member of our squad.

“He has settled in well so far, both with the staff and players. He is an ambitious young player with great work ethic and attitude to learning. We are looking forward to working with Lekan for the upcoming season – Welcome to the club.”

Want to sponsor Lekan Majoyegbe next season? For a fee of £100 you will get: