Following three seasons at the club, Connor Wilkins has made his decision to move onto a new club. 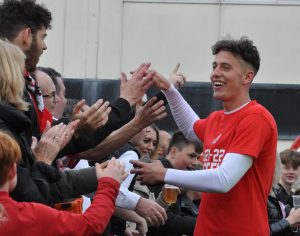 Connor first arrived at Sheppey United for the 2019/20 season, playing on 32 occasions and also chipping in with 3 goals. The following season saw the midfielder participate in 14 games with a return of 2 goals before Covid ended the season early.

For the 2021/22 season Connor suffered a long term injury during the post lockdown games which would see him out of the first team picture for almost 10 months – returning back to action away at Deal Town on 8th March. Connor finished the season appearing 9 times and also scoring away at K Sports.

Marcel Nimani was disappointed to see Connor move on, “It’s a shame we couldn’t keep hold of Connor but we understand his reasons, which includes wanting to play more football. After a Covid year and then a long term injury its an understandable decision.

“We did all we could to try and keep Connor here at the Sheppey United as we see great potential and value in him but none the less, we thank him for his service up to now. He’s been a brilliant footballer and servant to the club and also someone who is local and has many connections here. We have no doubt that in the future things could change and Connor would be welcome back anytime, until then he leaves us with our best wishes.”

Connor was sad to leave but wanted to say, “Ahh, all good things come to an end!

“Sheppey United is one of the best clubs I’ve played at which has the potential to go far. I’ve thoroughly enjoyed my 3 years at the club, it was a shame my quadruple season got cut short due to my injury but I was glad to play a part in the end quarter of the season!

“I want to thank Ernie and Marcel along with all the coaches, especially Kingy and Lee who would run to the moon and back for the club, there’s not many people like you both. I want to thank the players who were like my brothers, and lastly the brilliant fans! As everyone knows I’m an Island boy so this club is close to my heart, I want to wish the club the very best for next season – Sheppey will certainly be the first result I look out for come 5pm every Saturday!…….All the best”