WARREN IS BACK AND HUNGRY FOR MORE GOALS 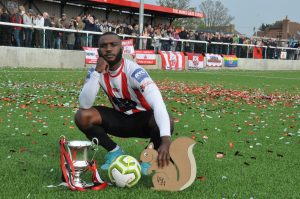 Warren first joined the Ites for the start of the 2020/21 season and bagged 8 goals in 13 games before the season was cut short due to Covid.

Mfula started last season with Corinthian Casuals due to a change in personal circumstances which meant he couldn’t commit to the Ites, but when this changed he was able to join Sheppey for the second half of the campaign. He quickly found his form – bagging an incredible 35 goals in just 29 games. This would include hat-tricks against Tower Hamlets (twice), Welling Town and Deal Town. Warren also assisted a further 5 goals.

Upon confirming he was committing to another season, Warren said “I’m glad to be back here next season. The support I’ve been given by the fans is unreal and I’m hungry to continue scoring goals and putting smiles on their faces. It’s going to be a tough season coming-up but Ernie and Marcel are putting a strong squad together and we will go out there every game and give it 100%. Up the Ites!”

Assistant Manager Marcel Nimani was glad to see the goal machine return, “We are thrilled to have Wazza stay with us for another year, he is a proven goal scorer across all steps of non league football.

“Given the amount of goals he scored for us last season, it is obvious that we are a great set up for him and his record backs that up – Sheppey United and Warren really clicked well together and long may that continue in 2022/23” 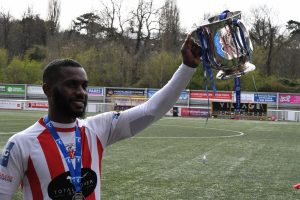 Want to sponsor Warren Mfula next season? For a fee of £100 you will get:

Next Story:
ERNIE & MARCEL WELCOME ALICE TO THE TEAM