SHEPPARD: THE AMBITION OF THE STAFF, PLAYERS AND THE FANS IS SO CONTAGIOUS

Midfielder Ashley Sheppard is the latest Ites player to commit to the 2022/23 season to become the 8th retained squad player from last season. 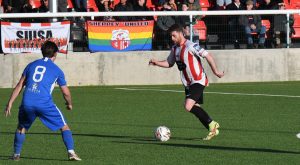 Ashley joined us late in January 2022 from Rusthall after catching the eye of the management team when playing against us at Holm Park earlier this season. The hardworking midfielder was constantly earning rave reviews at his former club and once he signed for the Ites he brought the same energy and craft to Holm Park.

Having already played in the SCEFL and KST cup competitions for Rusthall, plus the form of Hamill, Gillies and Orome, Sheppard found game time limited but when he was on the pitch he still turned in 3 assists from just over 400 minutes of football – and also recorded the highest single metres covered on a pitch by any Sheppey player last season, an incredible 10,782 metres away at Tower Hamlets. It was also very noticeable that when he wasn’t in the 16 Ashley supported his teammates from the sidelines, even at every away game.

Upon committing his future with the Ites, Ashley was delighted to get the deal done, “What a season it has been for me on a personal level for several reasons. Winning the SCEFL Premier in my first full season of senior football, and proving to myself I can compete at this level have been the main achievements by far.

“It was a very easy decision for me to continue my journey with the club for next season as the ambition of the staff, players and the fans is so contagious. The training, match preparation, recovery, support and the love you are shown is on a huge level that makes you want to be the best and leave everything out there for everyone associated to the club.

“I’m looking forward to the new challenges ahead can’t wait to get back out there and play – My work has already started and I will be hitting the ground running in pre-season!……..UP THE ITESSSSS!”

Assistant Manager Marcel Nimani was delighted to be working with Ashley again, “Ashley first caught our eye in the game he played against us so we kept an eye on him and when the time came we spoke to him and he bought into our project.

“He showed to be even a better player when he joined us and won the players respect from the very first training session. He’s a hard worker, very good technically, an industrial central midfielder with an eye to get himself into goal scoring position or set-up a colleague.

“Ashley will go on to show more of his hidden attributes as we feel he still has room for improvement.” 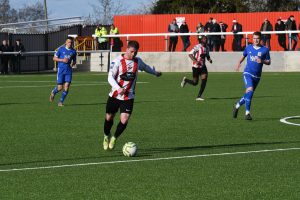 Want to sponsor Ashley Sheppard next season? For a fee of £100 you will get: