Michael Hagan is the latest member of last seasons quadruple winning squad to extend his stay with the Ites into the 2022/23 season. 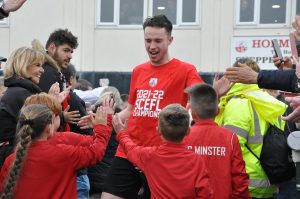 Having joined the Ites last summer, winger Michael Hagan soon become a popular member of the squad both on and off the field. His first goal for the Club came early into the season, scoring away at Tower Hamlets in the FA Cup.

Roll-on two weeks and with Sheppey two goals down at home to Chatham Town, substitute Hagan played a pivotal role in turning the game into a victory – setting up Ben Wilson for an equaliser and then bagging the winner against his former team!

Hagan would end the season with 6 goals and 6 assists – but pretty much all of these were key contributions – including his cross for Helge Orome to nod home a last minute winner away at Lordswood and it was his corner that led to Jefferson Aibangbee heading the equalising goal in the 3-3 comeback against Glebe.

With the season drawing to a close Hagan was put on free-kick duty – and duly netted away at Sutton Athletic and then in the Kent Senior Cup final with his first kick of the game having been introduced as a substitute.

On extending his stay with Sheppey United, Michael said, “Last season was a joy to be a part of, but now we have a new season to focus on!

“When the gaffer came to me about signing on for the new season it was a no-brainer for me as this club feels like home – ever since I signed I felt something special at the club, the ambition and plans that are in place can only bring good things in my opinion and I cannot wait to see what more is to come.

“I’m looking forward to playing next season as the league will be a real test for all of the clubs involved and I want to improve upon my numbers from last season. Obviously, the play-offs is where we will want to be so bring it on.”

The signing of Hagan was another one that delighted Assistant Manager Marcel Nimani, “We’re delighted Michael Hagan has extending his stay with us. We nicknamed him ‘the sharpshooter’ due to his precision with his dead ball delivery. He was our hidden secret last season and came on as substitute and made a huge impact on a number of games which contributed heavily in our successes – long may this continue and we’re optimistic that Hagan will continue to be a key member of our squad next season” 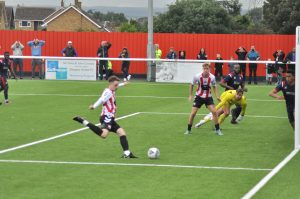 Want to sponsor Michael Hagan next season? For a fee of £100 you will get:

Previous Story:
FAREWELL MOLLOY & NORTHWOOD – AND ALL THE BEST