Wide man Jefferson Aibangbee has agreed terms to extend his stay with the Ites into the 2022/23 season to become the 7th retained squad player from last season. 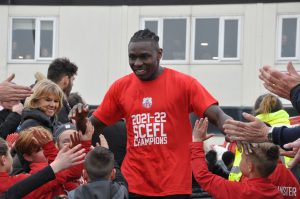 Jefferson originally started as a trialist with the Ites during the Post-Lockdown Challenge Tournament but despite impressing, an injury set him back a few months. After re-joining the Ites once the season commenced he impressed in training enough to convince Ernie Batten to sign him – making his debut as a substitute away to Hollands & Blair at the end of August.

Jefferson scored 11 goals for the Ites with his first coming against Rochester United – and some important ones followed, which included the equaliser in the 3-3 draw against Glebe. Being a winger he also turned provider for his teammates assisting on 18 goals which was only bettered by Billy Bennett.

With pace, skill and entertainment it was of no surprise Jeff also racked-up 3 fans man of the match awards.

On pledging to another season with Sheppey United,  Jefferson said, “Last season was probably the best football I’ve played as I came into every game focused and ready to put on a show for the fans.

“I’m happy to stay and agree terms despite numerous offers from clubs – what lured me to carry on this journey with Sheppey is the management and also the group of players we have, the togetherness on and off the pitch is unreal.

Assistant Manager Marcel Nimani was delighted to be working with Jefferson again, “Jeff came to us as a surprise package through a recommendation without us not seeing him play before and he impressed with his raw attributes in the lockdown games.

“I recall doing some analysis on him through our video clips which made us go after him and he really blossomed in our environment – he got fitter and his knowledge of the game really improved and from halfway through the season he performed really well.

I’m pleased he agreed to stay on another year and I’m sure another year in our set-up will mean he is just as successful in the step above.” 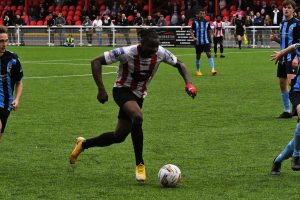 Want to sponsor Jefferson Aibangbee next season? For a fee of £100 you will get:

Next Story:
SHEPPARD: THE AMBITION OF THE STAFF, PLAYERS AND THE FANS IS SO CONTAGIOUS