Popular forward Dean Grant has agreed terms to extend his stay with the Ites into the 2022/23 season. 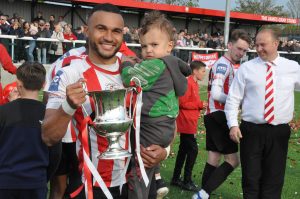 Originally brought to the club towards the premature end of the 2019/20 season ‘Deano’ struck one goal in 4 appearances (3 as substitute). The 31 year old would then play elsewhere before he returned to the Ites in time to make a second debut on the 27th December 2021 against K Sports at Holm Park.

Although predominantly a centre forward, Deano played a number of games as a winger but nevertheless still applied his high intensity style to much effect. His first goal of his second spell came away to Kennington in the SCEFL Challenge Cup before he then struck in the league to away at Erith & Belvedere. The following week he operated as a centre forward with great effect, scoring away at Deal Town and also earning the fans man of the match award.

Deano then scored two goals in the return fixture against Deal Town at Holm Park – before he scored the winning goal against Hollands & Blair in the Kent Senior Trophy. Having a taste for scoring cup finals become a habit as he then went on to grab a double against Crowborough in the SCEFL Challenge Cup final in the last game of the season.

On pledging to another season with Sheppey United,  Dean said, “It was an absolute no brainer and probably the biggest no brainer in my career. I stepped back from what was achieved last season and made a decision that was best for this stage of my career. I’m eager to see what the club can do next season and excited to use my experience to represent the club in a league I have a lot of history with.

“It’s the first time for a good number of years I’ve enjoyed my football and long may it continue!!……Up the Ites!!”

Speaking on retaining Dean Grant, Marcel Nimani added, “We are very pleased to have this agreed, he joined us halfway through the season and was very patient  and as soon as he got fit and into the side he certainly didn’t let go of his starting position. He was very adaptable and provides a lot of experience for this league we’re stepping into. 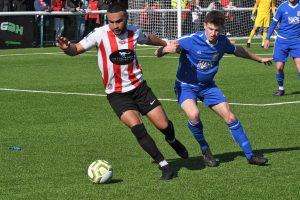 Want to sponsor Dean Grant next season? For a fee of £100 you will get:

Previous Story:
SUPPORTERS PLAYER OF THE SEASON BENNETT COMMITS TO ANOTHER YEAR

Next Story:
SAINS REMAINS AN ITE!