Players’ Player of the season Ashley Sains has agreed terms to extend his stay with the Ites into the 2022/23 season. 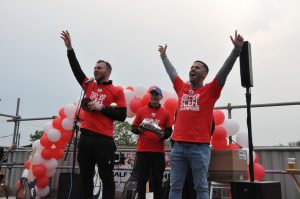 Ashley Sains joined the Ites in time for pre-season last year and made his full competitive debut away at Tower Hamlets in the FA Cup.

The following week ‘Sainsy’ scored the Ites first goal of the season at Holm Park (v Fisher) – which was also the first game on the newly installed 4G service.

In total, Ashley Sains made 44 appearances last season for the Ites, 22 of these producing clean sheets and a win success of 89% when he was involved. It also went without notice that he also made a big contribution up the other end of the pitch – scoring 6 goals and assisting a further 4.

Having ended the season with one league title and 3 cup winners medals on his mantlepiece it was of no surprise he also collected the Players’ Player award from his colleagues at the end of the season.

On pledging to another season with Sheppey United,  Ashley said, “It was an absolute pleasure last season playing in front of the amazing fans, playing for the management team and having the back room staff around us like we did throughout the year – everyone was top notch and played their part in that success we had last year!! 🏆🏆🏆🏆

“After a season like we’ve just had, very hard, tough and demanding I needed to take a good few weeks away from the game before making decisions and weighing-up my options on where I’ll be next year.

“I’m really pleased we managed to agree terms for the new season and with the recruitment of what the management have spoken about, I do believe this year, being realistic of course, it could be another good one in terms of the club’s progression and where they want to get to!……..UP THE ITES 🔴⚪️! Let’s go!”

Assistant Manager Marcel Nimani was delighted to have Ashley back for the new campaign, “We are extremely pleased to have Sainsy onboard, he was an integral part of our team last season. A leader at the back and a huge contributor to the amount of clean sheets we kept across all competitions. 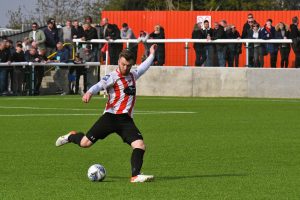 Want to sponsor Ashley Sains next season? For a fee of £100 you will get:

Next Story:
FAREWELL MOLLOY & NORTHWOOD – AND ALL THE BEST