THANK YOU HELGE AND ALL THE BEST FOR THE FUTURE

Today it was confirmed that midfielder Helge Orome will be departing the Club for pastures new.

Helge originally joined us during pre-season last year but then moved-on to Glebe before making his way back to the Ites in September and making his competitive debut against Lordswood at home.

Orome played a total of 42 games for the Ites, scoring 6 goals and assisting 8.

Speaking of Helge’s departure Marcel Nimani said “I’d like to thank Helge for his huge contribution at this Club, he was an individual I really enjoyed working with, full of charisma and witty humour – but surprisingly despite his high levels of charisma and humour is actually a very low maintenance player to work with. He turns up, does his thing constantly – but does it very well too. 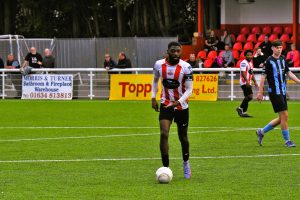 Next Story:
MIDFIELD DYNAMO GILLIES RETURNS FOR A 2ND SEASON – AND IS EAGER TO GO AGAIN