SUPPORTERS PLAYER OF THE SEASON BENNETT COMMITS TO ANOTHER YEAR

Supporters player of the season Billy Bennett has agreed terms to extend his stay with the Ites into the 2022/23 season. 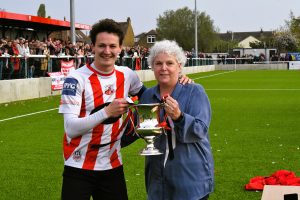 Originally brought to the club during the 2019/20 season Bennett struck 3 goals in 30 games. The following season saw Billy hit top form only for the campaign to then end prematurely due to the pandemic with his return of 10 goals in 17 games putting the Ites as top contenders to fight for promotion had it not been for the early finish.

Last season will probably go down as Billy’s most successful ever. An impressive 24 goals and 30 assists would go a long way to helping the Ites not only win the SCEFL league title but also 3 cup competitions on the way – With Billy lifting each bit of silverware having taken on the captains role due to the long term injury suffered by Jack Midson. Billy’s 24 goals would include a hat-trick against Tunbridge Wells and the first goal of the SCEFL Challenge Cup final.

Billy also racked-up the most minutes played by any outfield player, grafting for 4473 minutes – this was only beaten by goalie Adam Molley (4590 minutes). The last game of the season was also the 100th Ites game Billy had played for the Club.

On pledging to another season with Sheppey United,  Billy said, “I had a lot of interest both during and at the end of the season but it was an easy decision to stay at Sheppey. The infrastructure, the people and the supporters make it one of the best clubs at the level we’re going into and we cannot wait to get started.

“Last season will never be matched in terms of our success (🏆🏆🏆🏆) but if we get the recruitment process right then I see no reason for us to not be able to match the ambition of the club and challenge towards the top half of the table – Let’s go!!”

Speaking on retaining Billy, Marcel Nimani added, “I’m delighted to have Bill committed to us for another season despite a number of options he had put to him from step 5 all the way up to step 3 – and that’s a real credit to what Bill is all about in terms of his loyalty and it’s a complement to our setup that he’s elected to stay with us.

“Bill is a heavy contributor to the stats on the pitch in terms of assists, goals, minutes played and distance covered but it goes without notice how he also stepped-up as captain following Jack Midson’s injury. Bill played that role massively and I was impressed on how he led the side and that showed to be key especially in tight games last season. ” 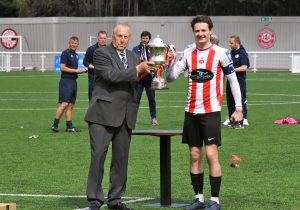 Want to sponsor Billy Bennett next season? For a fee of £100 you will get:

Previous Story:
MIDFIELD DYNAMO GILLIES RETURNS FOR A 2ND SEASON – AND IS EAGER TO GO AGAIN