Competitive Midfielder Liam Gillies has joined Renford Tenyue in confirming his commitment for the 2022/23 season. 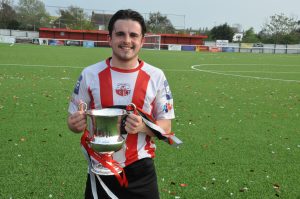 Ex-Gillingham youth player Gillies joined us from Whitstable Town a couple of months into last season and was an instant hit with the fans for his box to box displays and love for a tackle.

Liam hit 5 goals for the Ites, including finishing-off a 17 pass move against Rusthall and scoring a vital goal in the 3-3 comeback against Glebe.

His work rate in midfield meant he ended the season top of the average distance covered on a pitch stats – an impressive 104mtrs per minute!

Having featured in 33 games for the Ites, Gillies is delighted to be back to add to that tally.

He said, “I’ve stayed on for another season because of the original reason I joined – the club has a great ambition to strive for success and trophies!

“I think everyone can see the amazing project that is going on here at Sheppey and as the years go on it’s only going to get better and better – winning 4 trophies last season was incredible and something that won’t be achieved again for a very, very long time.

“Coming to Sheppey last season was the best decision I have made so far in my career – it was the most I’ve ever enjoyed my football at a senior level!

“Personally for myself I’m still only young and I believe this is definitely the best place for me to improve and progress with my own ability.

“Lastly and probably the main reason of staying this season is because of the people and fans around the club. The fans have done nothing but make me feel welcome. It’s like one family and for us players it truly makes it an environment and football club you want to play for and stick with. The following we get week in, week out is really really spectacular – So hopefully another great season in the Isthmian……..UP THE ITES!”

Speaking on retaining Gillies, Marcel Nimani added, “Liam was one of the deals we wanted to get over the line early as we knew there would be high interest in him – and there certainly was.

“He plays with high intensity and that showed with his impressive distance stats. He’s a popular character in the changing room too and that’s an important attribute in any team to have.

“I look forward to working with Liam further, he has experience at this level and that will be a significant feature to have for the upcoming campaign” 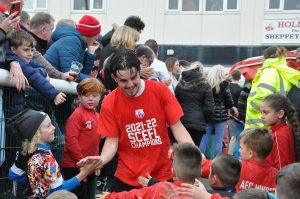 Want to sponsor Liam Gillies next season? For a fee of £100 you will get:

Previous Story:
THANK YOU HELGE AND ALL THE BEST FOR THE FUTURE

Next Story:
SUPPORTERS PLAYER OF THE SEASON BENNETT COMMITS TO ANOTHER YEAR