TENYUE EXTENDS HIS STAY: MANAGERS PLAYER OF THE SEASON READY FOR MORE!

Utility player Renford Tenyue is confirmed as first through the door ready for the 2022/23 season having agreed terms to return to the Ites where he has already amassed 57 appearances. 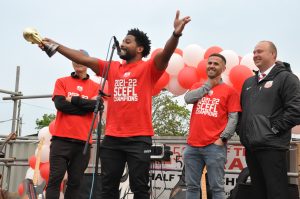 Originally brought to the club towards the end of the 2019/20 season Tenyue struck a single goal in 5 games whilst playing in his favoured position on the wing. The following season saw the campaign end prematurely with Renford involved in 7 games and returning 1 goal

It would be 2021/22 where Renford was to shine. Having scored in the season opener away to Tunbridge Wells the winger was soon asked to fill both fullback positions and took to it so well he would soon claim the regular left back slot seeing off competition that had previously seen Danny Smith and Ben Wilson fill the role. Two man of the match performances against Littlehampton Town and Holmesdale away showed his performances were also appreciated by the supporters.

Having finished the season with 1 league title and 3 cup medals under his belt Renford was only too happy to extend his career with the Ites, “I couldn’t see myself playing for someone else next season. The fans made this a really easy decision for me to sign on again” said the fullback.

Speaking on retaining Tenyue, Marcel Nimani added, “Ren was one of the most reliable players in the division last season and by now everyone knows exactly what we’re getting with him. He has great experience and his versatility really helped us out on our way to making last season what it was. He’s a good player that a lot of the younger guys can learn from and he deserved to get the Managers award at the end of a great season for him.”

Tenyue ended by saying, “I really enjoy my football here at this club and I’ve still got so much more to give”

Want to sponsor Renford Tenyue next season? For a fee of £100 you will get: 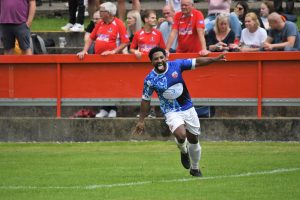 Previous Story:
EXCLUSIVE: NEW AWAY SHIRT + YOUR CHANCE TO BE PART OF IT!

Next Story:
THANK YOU HELGE AND ALL THE BEST FOR THE FUTURE