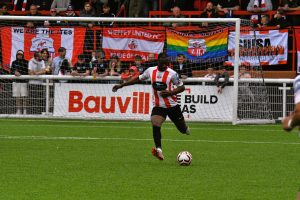 Assistant Manager Marcel Nimani had nothing but praise for the defender, “Jahmal is a great professional who always gave 100% in training and was dedicated to win every game on the pitch. He’s left a great legacy at the club and the Island.

“He was a great guy to work with both on and off the pitch and we at Sheppey United wish him all the best for the future, and of course he is always welcome back at the Club”.

Jahmal had the following to say on his departure “After 2 and a half years playing for Sheppey, I have decided it is the right time to move on.

“Having played 1 full season and 2 part seasons, I have been part of an incredible group who have rightfully been successful this season.

“It has not been an easy decision to leave by any stretch of the imagination. I am leaving players and management, fans & volunteers that have allowed me to express myself and enjoy football again.

“The on and off field support I have received from all at the club during my time here has given me the confidence to be myself in the changing room and whilst playing, which I will be eternally grateful for.

“There are too many individuals to give personal thanks to, I would just like to thank everybody associated with the club for being the amazing human beings they are and I wish the club all the very best moving forwards!

Jahmal ended up appearing 76 times for the Ites across three seasons (two ending early due to Covid), scoring one goal – against Welling United in the famous FA Cup win at Holm Park.

Next Story:
EXCLUSIVE: NEW AWAY SHIRT + YOUR CHANCE TO BE PART OF IT!