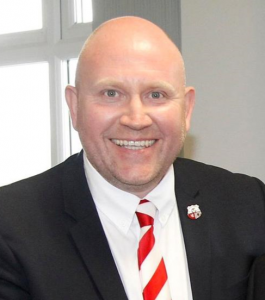 Sheppey United FC are delighted to announce that we have secured our first signing of the summer. Paul Rogers will be re-joining Sheppey United FC for the 2022-23 season as Commercial Director.

Paul first joined us in the 2015-16 season where he transformed our commercial presence across the board which saw us as the envy within the SCEFL leagues for our commercial offering. His time in the professional game at Gillingham FC as part of the commercial and events team there paid dividends with the many initiatives that were not utilised there were very welcomed by us.

Sadly Paul had to step away in 2019 to focus and spend time on his own businesses outside of football but after several conversations and a meeting at the ground last night Paul agreed to come back on board for the new season.

“This is a superb addition to the club at such a vital time as we enter step 4 football in the Isthmian League. We need to spend the summer preparing both on and off pitch so we are ready for the challenge ahead. Having worked with Paul before I know that he will give us that extra push in working closely with our valued existing sponsors and advertisers as well as the many new ones too” said Matt Smith.

“It was with a very heavy heart that I had to step away from the club a few seasons ago due to the time that is needed to dedicate to the role. From my very first meeting with Matt back in 2015 when there were gates of around 100 – 150 where I was sitting in the stand with my two boys watching, I knew that there was something big going to happening here and after the rise, cups wins and last season’s historic achievement, well you all know the story – it’s just been amazing”.

“I spent last season watching from the side lines and know how hard everyone had worked on both sides of the pitch. People were working across multiple roles and the entire committee and all of the staff worked their socks off. Mike King had to cover all manner of jobs and did brilliantly to cover the commercial side as well as his involvement with the first team and his own youth team too. I am looking forward to talking and meeting up again with all sponsors who have continued to back the club and to also bring some new ideas in and keep the fan engagement and involvement up. There’s never been a better time for local companies to back and support the Ites, it’s going to be a very exciting season with many Kent derbies to whet the appetite. The close season is probably one of the busiest within a football club so now it’s time to get to work – watch this space!”