A record crowd at the Total Power Stadium of 1,282 saw the Ites beat Chatham Town to the title and finish on an incredible 102 points. 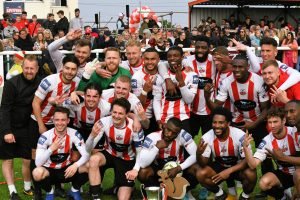 Saturdays opponents Tower Hamlets done well to restrict the Ites for most of the first half with the home side kept at bay despite chances – Billy Bennett saw an effort blocked, Liam Gillies’ 25-yard shot was tipped over for a corner and Richie Hamill saw his effort attempt saved by the keeper.

The deadlock was finally broken on 37 minutes – Warren Mfula closing down the keeper’s clearance to run and tap into an unguarded net. He maybe should have doubled his tally before half-time but he couldn’t take advantage of Bennett’s through ball.

In the second half Mfula did double his goal count when he took on a pass from Gillies and beat the keeper in front of the Queenborough Road stand. Substitute Helge Orome was twice denied by an outstanding double save by the visiting keeper.

The Ites then scored their final SCEFL goal – an 89th minute strike (and hat-trick goal) for Mfula who headed in a cross from substitute Michael Hagan.

Having won the Kent Senior Trophy twice this season, Sheppey now aim to complete an unprecedented quadruple on Bank Holiday Monday when they face Crowborough in the league’s Challenge Cup final at Chatham (1pm kick-off). 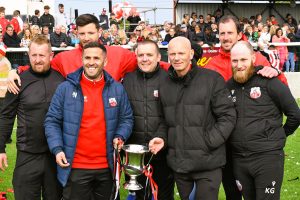 Previous Story:
TOTAL POWER GROUP CONTINUE TO BACK THE ITES IN 22/23