Lex Allan has today departed Sheppey United in a quest to get regular minutes under his belt. 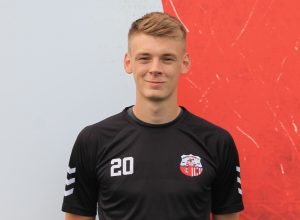 Lex returned to Sheppey last season having spent a few years with Sittingbourne FC but the season was cut short due to the pandemic. Although Allan started this current season as first choice, the form of Ashley Sains and Jahmal Howlett-Mundle has seen his game time restricted of late.

“Thank you to Kingy, Kerri & Lee who are true clubs legends and would do anything for anyone!

“It’s been a good experience, the fans have been amazing and I hope the boys can secure that promotion (I’m certain they will)

“Last but not least, I’d like to thank Ernie & Marcel for all they’ve done. I enjoyed my time playing under them, brilliant coaches but even nicer people and I wish them all the best for the remainder of the season.”

Lex started 20 games this season, a further 4 appearances as a substitute and scored one goal.

We hope to update our supporters on the progress of new signings over the next week, including an interview with one of the coaching staff at the weekend.

We thank Lex for his services to the club and look forward to seeing our supporters cheer us on at Welling Town on Saturday.

Next Story:
ERNIE PULLS FOUR SIGNINGS OUT OF THE DRAWER