BENNETT AND NEWBY SCORE AS THE ITES DEFEAT BEARSTED

Sheppey United progressed into the 3rd round of the SCEFL Challenge Cup by defeating Bearsted at home by two goals to nil.

With the FA Vase just around the corner the Ites made many changes to their starting 11 – Northwood, Wilson, Howlett-Mundle, Newby, Hamill and Roberts all coming into the side. 16 year olds Jack Marsh and Frankie Dolby both took a place on the substitute bench alongside U23s left back Jack Perry.

Although the away side registered the first attempt of the night straight at Northwood it was Illia Saukh at the opposite end who had to make a good save to deny Bennett and present the Ites with a corner on on 6 minutes, which didn’t lead to much.

Northwood was on hand to deny Bearsted on 20 minutes whilst for Sheppey they had most of the possession but just couldn’t quite get the final ball or run to perfection.

The deadlock was broken on 40 minutes – Aibangbee threading a pass for Bennett to carry the ball into the box and calmly place past Saukh for 1-0.

The Ites were now well on top with Saukh denying Aibangbee from 20 yards and a left foot volley from Hagan just over the bar. 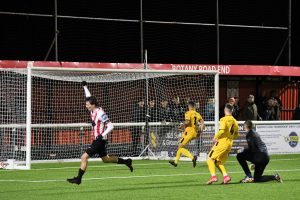 After playing an hour into his comeback from injury, Jahmal Howlett-Mundle was replaced for Ashley Sains.  On 72 minutes, the save of the game fell the way of Northwood who got down quickly to tip a shot from Adablo around the post.

With the game into the last quarter the Ites introduced Jack Marsh in place of Billy Bennett. The home side doubled their lead on 81 minutes when Ashley Sains released Michael Hagan with the winger cutting the ball back for Newby to shoot into the net from the edge of the area for 2-0.

Frankie Dolby was then given his second Ites appearance and more experience for the 16 year old. Fellow 16-year old Jack Marsh was denied his first senior goal on 88 minutes when Saukh got down well at the near post to deny the forward. 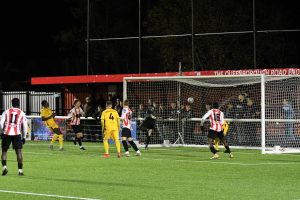 Previous Story:
ITES CLAIM A DRAW FROM 3 DOWN

Next Story:
MFULA RETURN CAPS-OFF A BUSY WEEK OF RECRUITMENT