ITES CLAIM A DRAW FROM 3 DOWN

Sheppey United maintained their unbeaten run in the league by putting on a dramatic comeback in the top of the table clash against Glebe.

Following the last minute win at Lordswood manager Ernie Batten made two changes to his starting line-up – in came Dan Birch and Helge Orome with Ben Wilson and Richie Hamill dropping to the bench.

The Ites were dealt a blow on 7 minutes when a cross from the left towards Jamie Philpott was put into the net by the goal scoring machine to give the visitors the lead. Sheppey retaliated with Jack Midson heading a corner over the top and not long afterwards Liam Gillies striking the post from 25 yards.  On 26 minutes Glebe doubled their lead when Ryan King-Elliot shot beyond Molloy from outside the 18 yard box. 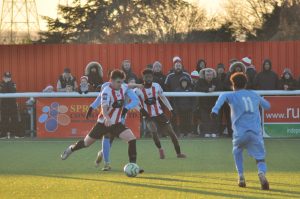 And then just before half-time Glebe made it a 3 goal cushion with Jamie Philpott grabbing his second of the game to make it 0-3.

Sheppey ran out after the half-time team talk unchanged – but fired-up. Glebe  keeper Billy Johnson produced an outstanding save to deny Billy Bennett from just inside the box on 48 minutes – but he was soon picking the ball out of the net. On 53 minutes Malachi Hudson charged down the left flank and his cross wasn’t cleared by Glebe and the ball fell sweetly to Liam Gillies to run onto and strike past Johnson for 1-3. 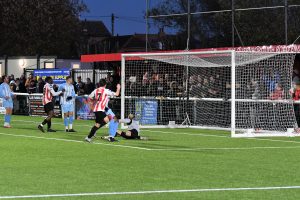 Dead on the hour mark Sheppey had their second with Ashley Sains stabbing the ball into the net from Jefferson Aibangbee’s corner. 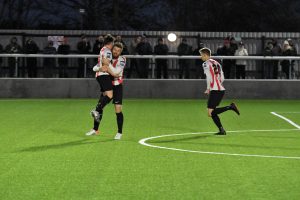 Glebe then fired a free-kick over the Ites bar on 68 minutes before Lex Allax almost connected to Helge Orome’s free-kick at the opposite end of the pitch.  A few fans may have been surprised on 75 minutes when Batten withdrew striker Midson and threw on winger Michael Hagan with Aibangbee instructed to play through the middle. Batten must have known something as on 78 minutes Hagan swung over a corner which Aibangbee looped a header inti the net for 3-3! 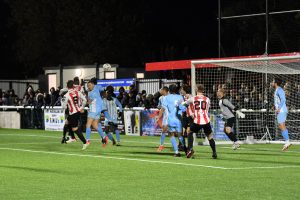 It was then down to Billy Johnson to deny the Ites the lead, first denying Gillies who drove at Tenyue’s cross and then getting down low to stop a Hudson drive creeping into the net from distance. That said, Sheppey had to thank Dan Birch for a last ditch interception to prevent Glebe an attempt from barely 6 yards out at the home end.  In stoppage-time there were big Sheppey shouts for a penalty when Hudson was bundled over in the box but the referee waved play on.

Previous Story:
THE RISE OF JACK COULD BE THE START OF MANY

Next Story:
BENNETT AND NEWBY SCORE AS THE ITES DEFEAT BEARSTED