THE RISE OF JACK COULD BE THE START OF MANY

Joint Chairman Gary Seamark was delighted with yesterday’s news on the signing of young Jack Marsh to our senior set-up. Gary for a few years now has also held the role as Youth Chairman and we caught-up with him to gather some thoughts

“For me, yesterday was a proud day. It’s marvellous seeing another product of our youth system joining the first team ranks, having developed with us for a number of years. One of our key messages has always been if a player is good enough then chances will come. Jack has come through the system and recently started to play for our U23s and his performances have not gone unnoticed having scored 4 goals last weekend. 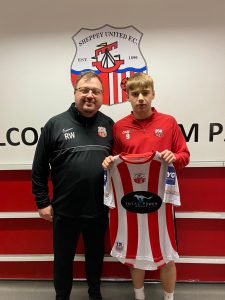 “Under 18s manager Ross Wiles should rightly be so proud of this achievement. Ross has a great side at his disposal and it’s been great seeing a number of the lads having some experience with the first team since the lockdown eased – that being at friendly games or training with the first team. Some of you may have seen the likes of Alfie Irvine, Frankie Dolby and Bailey Catherick in the pre-season squads. A few of the lads have joined these guys at U23s games this season, players like Bleu Landeu and Alfie King to name but a few. Giving these youngsters the next step-up in terms of experience will help their development.

“It’s exciting times for the youth set-up. The academy will be in full swing next year, headed-up by Jack Midson and having that in place further strengthens what we want to bring to this club and community. We also offer youth football from U8s all the way up to senior level now – there’s some cracking talent around that’s coached by our dedicated and forward thinking coaches. We want to be the club that not only young players want to play for but also eventually puts these lads on the pitch representing the first team.

“We normally have a full programme of youth football going-on every Sunday. Our social media advertises the games and it would be great if you can come along and support the teams – entry is free.

“In the meantime, I would like to thank you all for your continued support and also wish Jack Marsh the very best as he starts his next chapter with us”.

Previous Story:
HAT-TRICK FROM ROBERTS PUTS THE ITES INTO ROUND 3

Next Story:
ITES CLAIM A DRAW FROM 3 DOWN