HAT-TRICK FROM ROBERTS PUTS THE ITES INTO ROUND 3

Sheppey United progressed into the third round of the FA Vase with substitute Taurean Roberts scoring a hat-trick at Sheerwater.
The Ites fielded an unchanged side for the third game running with Jack Midson and Jahmal Howlett-Mundle still missing due to injury. Within 15 minutes the injury list got bigger with Junior Aikhionbare limping off with what appeared to be a groin injury and replaced for Taurean Roberts.
Having scored a hat-trick last weekend and two the game before it, Malachi Hudson was unlucky not to continue his streak when he hit the post just before the half hour mark. The Ites again went close on 37 minutes – Billy Bennett heading a corner against the post with the ball appearing to cross the line but despite protests the officials waved the game on.
The Ites finally took the lead on 40 minutes – Jefferson Aibangbee cutting a pass across the edge of the goalmouth for Tairean Roberts to hit a first timer for 1-nil. However, that deserved lead was short lived when Scott Costello levelled for 1-1 from close range.
Half-Time: Sheerwater 1 Sheppey United 1

Sheppey were again the more dominate team and took the lead again when a long ball from Ashley Sains was headed to the edge of the D by the defence where Taurean Roberts hit another first timer with his left foot for 2-1 on 61 minutes. A few minutes later Hudson was fouled in the box for a penalty – captain for the day Billy Bennett stepped aside from penalty duties to allow Roberts blast the penalty into the net for 3-1 and a hat-trick – which also meant he was the fourth Sheppey player this season to score a hat-trick.

Sheerwater pulled another goal back on 74 minutes via Jack Beadle but it was the Kent side who held out to put their name in the hat for the next round. 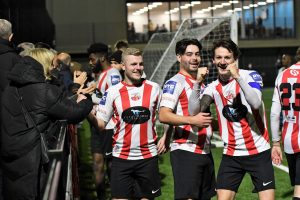 Next Story:
THE RISE OF JACK COULD BE THE START OF MANY