HUDSON DOUBLE KEEPS THE ITES TOP OF THE TABLE

Sheppey United brushed aside Rusthall 4-0 at home on Saturday to keep their place at the top of the SCEFL table.

The Ites made four changes to the side that started at Erith Town last weekend, coming in were Ashley Sains, Liam Gillies, Jefferson Aibangbee and Malachi Hudson. Both Jack Midson and Jahmal Howlett-Mundle missed out due to injury.

Sheppey started well with Aibangbee firing over the top after Birch found him on the edge of the 18 yard box. He was again denied on 8 minutes when a Lex Allan cross flew past Junior Aikhionbare to him on the edge of the 6 yard box, only for Charlie Wealands to pull off a great save.
The home side got their just rewards in the 15th minute when an Ashley Sains long ball over the top found Junior Aikhionbare who calmly beat Wealands for 1-0. On 27 minutes the Ites doubled their lead with one of their goals of the season – a 17 pass move brilliantly finished off by Liam Gillies having played a one-two with Jefferson Aibangbee before striking into the net.
On the half hour mark Sains found Gillies in space with the midfielder carrying the ball forward before shooting just wide of the far post. On 32 minutes the Ites somehow didn’t get goal number 3 – Aibangbee and Aikhionbare both stepping over the ball for Bennett to drive a shot against the post before Hudson saw his follow-up from a tight angle saved. 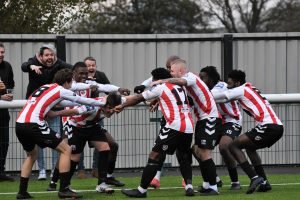 The Ites scored early after the restart – Aikhionbare passing to Hudson who shot from 30 yards out to put the home side 3 to the good. The Ites continued to dominate with Bennett heading wide on the hour mark and Aikhionbare seeing an attempt saved on 71 minutes. Bennett was denied by a double save on 82 minutes before on 88 minutes he cut the ball across the area for Hudson to strike his second goal of the game and give Sheppey a 4-0 lead.

Rusthall had a goal brushed off on 91 minutes for offside but the Ites held out to claim another clean sheet. 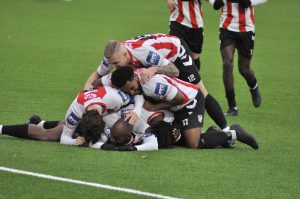 Next Story:
HUDSON TREBLE KEEPS ITES ON THE WINNING RUN