ITES DEFEAT ERITH TOWN TO KEEP TOP OF THE PILE

Sheppey United beat Erith Town 2-0 on the road on Saturday to keep top spot of the SCEFL table.

The Ites welcomed back Jack Midson who started as a lone striker with Junior Aikhionbare and Taurean Roberts playing on each flank. Lex Allan came in for Ashley Sains whilst Richie Hamill started in midfield instead of Liam Gillies.

The game was barely 5 minutes old when Jahmal Howlett-Mundle went down in pain, and after lengthy treatment both on the pitch and on the sidelines it was soon apparent that the injury was serious and Ben Wilson came on as his replacement.
The opening 25 minutes wasn’t free flowing although Sheppey did force a few corners. The first clear-cut chance fell the way of the hosts with Adam Molloy pulling out a great save and and even better one on the line when the rebound came his way.
Not so long after the Molloy save the Ites won another corner and as the cross came over Jack Midson was pushed to the ground with the referee instantly pointing to the penalty spot. Calm as you like, Midson converted the penalty for 1-0 to the Islanders.  Not long after scoring the goal a recurrence of a hamstring strain meant Midson was replaced for Jefferson Aibangbee. 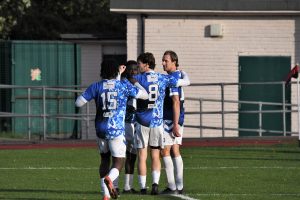 The Ites had the better of the play in the second half, especially as the game grew with Aibangbee giving the Erith left back a torrid time. However, on three separate incidents great defending by Allan, Orome and Birch denied the home side.

Aibangbee almost doubled the Ites lead when he slid to meet a Wilson cross but his touch could only deflect the ball over the bar. He then turned provider on 82 minutes, beating his man to then whip over a cross which Junior Aikhionbare rammed into the back of the net from close range for 2-0. Aikhionbare almost grabbed a second a few minutes later after latching onto a Bennett through ball but as he drew the keeper wide he ran out of room to get goalward. 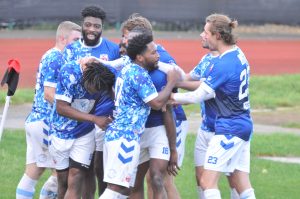