Sheppey United came from behind to defeat Kennington 2-1 at Holm Park and move top of the league on Tuesday night.

Just like the previous game, the Ites made plenty of changes – one enforced with a hamstring injury ruling out Jack Midson so Junior Aikhionbare was tasked with leading the line. Billy Bennett captained the side.

Despite plenty of early Sheppey pressure they fell behind with only 8 minutes on the clock – Tom Scorer finding a gap in front of goal to convert past Adam Molloy for 1-0 to the visitors.
As the game continued to flow it was evident that midfield in particular was going to play a key part – and with tackles flying in it wasn’t for the light hearted. Sheppey  went on to force a series of corners but couldn’t take advantage of any of them. Reward was soon coming though, and when Billy Bennett picked-up the ball midway into the Kennington halfway he slid a pass to the advancing Helge Orome to stroke past Joe Mant in the Kennington goal from 18 yards out for 1-1.
On 33 and 39 minutes Kennington pressed at the Ites goal with Sains and then Howlett-Mundle dealing with the attacks respectively. On the stroke of half-time the Ites forced another corner – Aibangbee whipped the ball over for Sains to rise the highest and nod into the net for 2-1! 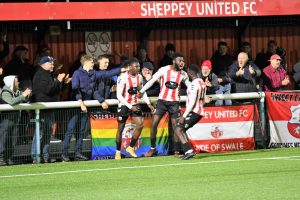 Kennington were presented with the first opportunity of the new half – a poor back pass went beyond Molloy for a corner. The resulting cross was pushed over by the keeper for a second corner kick, which he gathered from the air once the ball came over.

Helge Orome went on to shoot wide and also head an attempt from a corner off target before a series of yellow cards came out as tackles and fouls topped-up.  A finger tip save by Molloy on 78 minutes denied Kennington an equaliser with a follow-up corner nodded away by Sains.

With the game getting close to full-time Taurean Roberts struck the post and then Mant done well to deny Bennett moments later – but the Ites done enough to grab another three points and continue their unbeaten start to the league campaign. 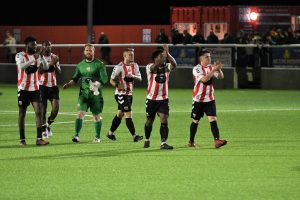 Next Story:
ITES DEFEAT ERITH TOWN TO KEEP TOP OF THE PILE