TWO FOR ROBERTS AS THE ITES PROGRESS IN THE FA VASE

The Ites made a few changes to the side that thumped Tunbridge Wells 4-0 in the Kent Senior Trophy – Molloy, Smith, Sains, Gillies and Midson some of those coming in with Birch, Bennett and a few others rested up ahead of crucial league games that are coming-up thick and fast.

The home side took an early lead – Jack Midson sliding in Taurean Roberts on the 4th minute mark with Roberts drawing wide of the keeper and calmly dispatching the ball into the empty net. On 7 minutes Midson nodded down to Danny Smith who got forward from left-back but his half volley bounced wide of the post.

On 10 minutes Molloy tipped a chance over from the visitors – but Sheppey broke from the resulting corner and could have scored from Danny Smith but the ball got a bit tangled under his feet.

The Ites then put constant pressure on their opponents. Hudson had a drive saved on 19 minutes, and then Hagan had three attempts on the goal within a 6 minute spell before Forest Hill went down to 10 men – Lawal fouling Midson when the veteran was through on goal and the referee pulled out the red card straight away.

Sheppey soon doubled their lead – and with the goal of the game, when Danny Smith passed to Liam Gillies on 33 minutes with the full debutant rifling in a shot from 30 yards in off the post. It should have been a third goal for the hosts three minutes later but after Tenyue found Midson in space the striker hit the ball over the bar. It didn’t take long for the Ites skipper to make up for that miss – he retrieved the ball on 39 minutes and threaded a glorious pass to Roberts who dazzled past challenges with his step-overs before sliding in his second goal for 3-0.

Hudson almost made it 4-0 before the break, only for a spectacular save by the keeper denying his well hit shot from outside the box. There was however a big concern for Ernie Batten and his coaching team with Jack Midson hobbling off just before the break with what looked like a hamstring injury. 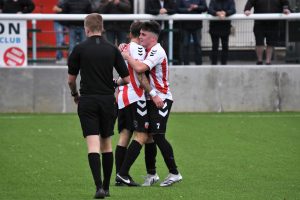 The 2nd half was one of frustration as despite a lot of possession the Ites didn’t really test the Forest Hill goal as much as the first half.

Junior Aikhionbare hit the post on 75 minutes and on 87 minutes a searching cross from Aibangbee was headed wide by Hagan.

Hamill was denied by a save on 88 minutes before the Ites grabbed their fourth and last goal – Aikhiobare hitting a low ball across the 6 yard box which hit a Forest Hill defender and flew into the net. 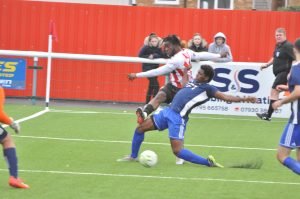