Sheppey United maintained their unbeaten run in the league with a narrow 1-0 victory over Holmesdale on Saturday.

Ernie Batten made a single change to the side that thrashed Canterbury City during the week  – Michael Freiter dropped to the bench with Richie Hamill starting in his place.

On 9 minutes an Helge Orome drop volley from outside the area was deflected wide for a corner. Richie Hamill curled the ball towards the near post where Jack Midson flicked into the net for 1-0 Sheppey. It was Midson’s 12th goal of the season.

With 23 minutes on the clock a Molloy long ball deceived the Holmesdale defenders and put Bennett through one-on-one with the keeper who guessed correctly and rescued the ball from the feet of Bennett as he tried to drag right.

Hudson then had a shot saved on 25 minutes and on the half an hour mark Danny Smith got forward only for the offside flag to go up with the left back about shoot. Holmesdale had a great chance on 35 minutes but the attempt was put wide.
With the first half drawing to a close Aibangbee was presented with a good opportunity on the right of the 6-yard box only for the keeper to close down his shot. 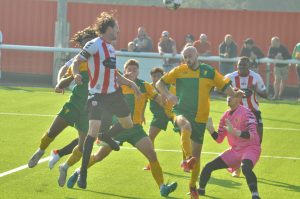 The 2nd half saw Sheppey waste a number of chances. This included Aibangbee’s drive from the right, calling the keeper into action again. With 65 minutes on the clock Molloy pulled out a great save to deny Holmesdale a goal from a free-kick.

Sheppey shouted for a penalty on 82 minutes when Midson appeared to be clipped in the box, but all the Ites got was a booking for their skipper for the protest. On 84 minutes Midson headed down in the direction of Aibangbee but as he lined up a shot he got squeezed by a defender and screwed his attempt wide.

A late free kick presented to Holmesdale following a push by Sains was well charged down by Aikhionbare to ensure the Ites kept their first clean sheet in 4 games and grab another 3 points. 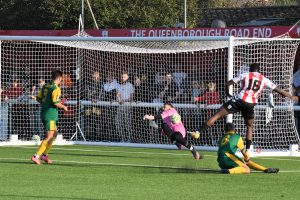 Next Story:
GILLIES ENTERS THE FRAY AS TWO ITES DEPART