SEVEN HEAVEN FOR THE ITES

Sheppey United recorded their biggest victory of the season so far as they defeated Canterbury City 7-1 in Faversham.

Ernie Batten made a few changes to the side that won at Welling Town at the weekend – named on the bench were Taurean Roberts, Richie Hamill and Lex Allan with Ashley Sains, Michael Freiter and Jefferson Aibangbee all starting. Junior Aikhionbare was also named as a substitute following injury.

It was a laboured start for the Ites and despite a few half chances they fell behind on 24 minutes when Samuel Hallett beat the offside trap to fire past Molloy by his left post.

That lead only last 4 minutes – Danny Smith finding Malachi Hudson on the left corner of the 18 yard box to float the ball into the net for 1-1. Four minutes later the Ites got their noses in front when Jack Midson was bundled over in the box – the veteran dusting himself off to coolly dispatch the penalty kick and claim his 10th goal of the season.

Sheppey were now in full flow and it took just two minutes for Midson to add to his tally after nodding home Aibangbee’s cross from the left flank – Midson’s 11th of the season and 9th in 5 games!

A few moments later and it was 4-1 to the away side – Hudson’s cross deflecting to Freiter on the 18 yard half circle and the Sheppey man hitting a first time volley straight into the net. 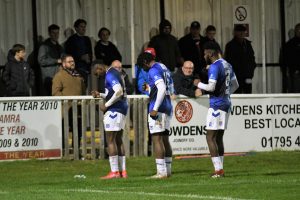 The Ites dominated the half, playing some good keep ball and impressive wing display. They claimed their 5th goal on  53 minutes – Aibangbee assisting again when his cross found Freiter to head his 2nd goal of the evening.

With Sheppey now  in a very comfortable position Ernie Batten rolled the changes which also included some vital game time for Junior Aikhionabre following his injury lay-off and a well deserved rest for Jack Midson.

A few chances were fired wide by Billy Bennett and Aikhionbare also had an attempt that didn’t lead to a goal as the dominance continued. However it would be the 86th and 88th minutes before Ites would claimed their last two goas. The 6th coming when Hudson slipped through Aibangbee to run through the middle and calmly slot beyond the keeper. And then on 88 minutes a Hudson shot from outside the area rebounded off the post for Aibangbee to tap home.

Next Story:
Man of the match vote – v Holmesdale