Sheppey United staff and supporters will be getting active in aid of a local charity. Three of them will run whilst one other will cycle as they start their journey at Gillingham FC and end back at Holm Park on Saturday 23rd October (hopefully before our game starts!).

The route the guys will take will see them complete around 14 miles. They are also hoping to wear full Sheppey United kit on the journey, with our social media also hoping to do a few Facebook lives updates as they reach certain milestones.

The four people doing this are:

Marcel is a school PE teacher at a Maidstone school but is also heavily involved with football at Sheppey. Marcel is the current 1st team Assistant Manager who also takes a keen interest in the youth setup, with Sheppey United looking to develop the young and exciting talent the Island can offer.

Marcel will be one of the three runners. 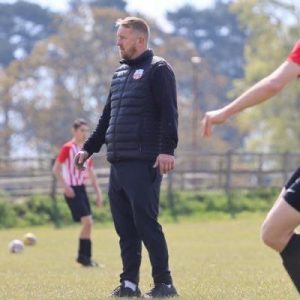 “Kingy” is a local Sheppey lad and a popular guy amongst the playing squad. Mike invests a lot of his spare time into Sheppey United FC. This is broken into two roles, firstly with the men’s 1st team helping with kit, equipment and coaching. Mike also manages the U15s boys team – his side successfully won their league last season.

Mike will be the cyclist on the route.

A runner who’s currently on a run every day campaign since 31st December 2016. Similar to his old school friend  Karl, Lee has run at both Brighton and London marathons on more than one occasion. Born and still living on Sheppey, Lee is also the Communications Director for Sheppey United FC.

Local runner who’s run at both the Brighton and London marathons on multiple occasions. A Sheppey United season ticket holder for many seasons who grew up on the island and lives and works there to this day.

Based in Trinity Church, Sheerness. Open on Monday mornings we provide food parcels to both families and individuals who reside on the Isle Of Sheppey. Our foodbank is run by local volunteers and we rely soley on the generosity of the public to help those less fortunate within our Island community.

If you can spare any donations it will be appreciated – and also sharing the link will be a massive help. 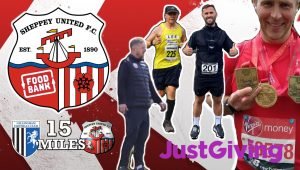 Next Story:
LATE PENALTY SEALS ANOTHER 3 POINTS FOR THE ITES