ITES DEFEAT ERITH TOWN TO PROGRESS IN THE VASE

Sheppey United defeated Erith Town 3-2 on the road to progress through to the next round of the FA Vase at the weekend.

The Ites made an in-different start at the early stages of the game with the home side taking the lead on 15 minutes – Harry Gamble not picked-up well as a free-kick was crossed over to him and head past Molloy for 1-0.

Sheppey then started to pick-up a bit and came close when Midson headed just wide of the far post. The away side did get level on the stroke of half-time – Hudson playing the ball from right to left where Roberts brushed past a few challenges before scoring off the far post. 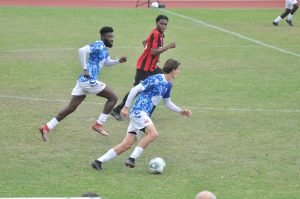 The Ites took the lead on 55 minutes – Hamill’s cross headed down by Orome for Midson to swivel on the turn and dispatch into the net for 1-2. However, the lead was short lived with Erith Town getting a fortunate penalty on 60 minutes, Hamill adjust to have tripped an opponent inside the box which appeared a few yards outside. Despite Sheppey players protesting, the referee stayed by his original decision and Steadman Callender converted the spot kick for 2-2.

Sheppey were the much stronger side this half and got their reward with 66 minutes on the clock – Hudson picking-up a ball from Bennett and firing in a debut goal and Sheppey’s third goal of the afternoon. 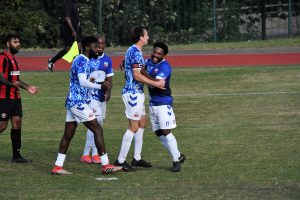