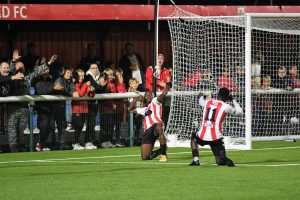 New signing Helge Orome was put straight into the side, playing in midfield which saw Jahmal Howlett-Mundle drop back to centre back in place of Lex Allan. It was also a home debut for Michael Freiter.

Sheppey dominated the game, so much so that keeper Adam Molloy had a trouble free evening. As early as the 3rd minute Midson sprayed a ball across to Roberts who got a shot in from a tight angle which keeper Bentley gathered.

The signs coming from the flow of Sheppey traffic indicated an early goal was coming, and it did with 8 minutes on the clock – Roberts playing an early ball into the box for Midson to place into the corner of the net with his right foot.

Sains and Freiter then put chances over the top and wide respectively before a Midson’s pass from right to left almost connected with Roberts who was inches away from getting a toe to the ball. The Ites doubled their lead on 25 minutes – Jefferson Aibangbee racing forward with the ball and slotting past Bentley for 2-0.

On the half an hour mark Midson connected to Freiters corner with Bentley saving his header. A couple of minutes later Roberts trickery turned two players inside out which enabled him to cross towards Aibangbee, who headed over – and was subsequently ruled offside. The last chance of the half came when Midson touched to Birch who crossed from the by-line with a back-flick from Freiter hitting the side netting.

5 minutes after the restart Ashley Sains put a header wide before then going off with an injury concern, Lex Allan his replacement. Richie Hamill was also later introduced in place of Freiter who’s still working on his match fitness. The hardworking Billy Bennett was then close to scoring twice – his first attempt was firing over the top after Roberts had a shot blocked, and then Bentley denied him from close range after Aibangbee put a ball into the box.

A few minutes later, a reverse pass by Aibangbee found Midson who crossed towards Bennett with Bentley saving the headed attempt. The relentless pressure continued, this time with a long pass by Howlett-Mundle picking out another substitute, Michael Hagan who cut inside and shot straight at Bentley. And then on 81 minutes, Dan Birch played Billy Bennett clean through with only the keeper to beat – but Bennett’s effort went the wrong side of the post.

A booking each for Orome and Muir for separate incidents didn’t do much to disrupt the one-way traffic, as demonstrated on 84 minutes with Hagan producing a save from Bentley with Midson possibly an alternative option to him instead.

Hagan would then race down the left wing again on 86 minutes before squaring to Bennett who’s shot was deflected for a corner. Richie Hamill curled in a delightful cross which was met by the head of Midson who directed the ball past Bentley for 3-0!

As soon as Lordswood restarted the game they passed the ball back to defence – and a slow pass to Bentley allowed Midson to intercept and finish his hat-trick from a tight angle and complete the perfect hat-trick (head and each foot).

One final chance fell to Bennett following good work by Hagan and Midson to set him up, but he was unable to find the back of the net. 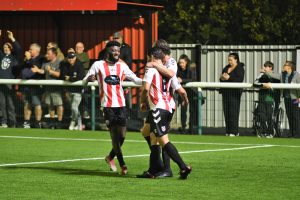 Next Story:
Orome and Freiter both Strike in Trophy win