JEFFREY STRIKE SEES THE ITES THROUGH

Sheppey United progressed through to the next round of the FA Vase after defeating Eastbourne Town away, thanks to a strike by substitute James Jeffrey. 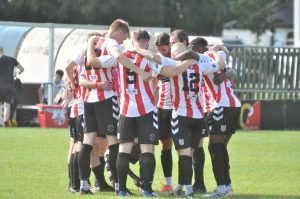 The Ites included new signing Michael Freiter in their line-up whilst Jefferson Aibangbee was preferred on the right flank in place of Michael Hagan. The hosts had the best chance early-on, Hopkinson put clean through in the 9th minute but he missed the target with Molloy not needing to make a save.

New boy Freiter found Midson on 15 minutes who stretched out a toe to the ball to poke the ball into the net – but the goal was ruled out for offside. With 22 minutes played Aibangbee went down in the box but played the ball to Freiter on the edge of the D with the midfielder shooting over the bar. Ten minutes later Roberts had an attempt saved with Aibangbee seeing his follow-up deflected onto the post and out for a corner.

The Ites were forced into a half-time substitution, Dan Birch going off with a knock to be replaced for Richie Hamill. A few half chances fell the way of Bennett and Midson for Sheppey but a better opportunity went the way of Eastbourne’s Johnson who only had Molloy to beat but he shot well off target.

With the game edging closer to a penalty shootout Ernie Battern introduced James Jeffrey and Michael Hagan into the action. Hagan instantly had an effort over the bar – before James Jeffrey picked-up the ball by the penalty spot and stroked the ball into the empty net with the keeper stranded.

Jeffrey was almost put through for a second goal on 84 minutes but Midson’s pass was cut out. The last opportunity fell the way of the home side with Lex Allan pulling out a great last ditch tackle to maintain a clean sheet for the Ites. 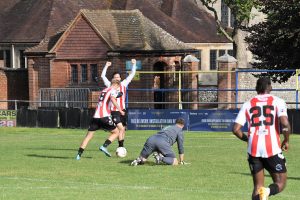