Sheppey United turned around a 2-0 deficit to defeat local rivals Chatham Town in front of a bumper crowd of 734 at The Total Power stadium on Saturday afternoon.

Ites manager Ernie Batten was forced into changes with Jahmal Howlett-Mundle and Junior Aikhionbare both unavailable which gave Luke Griffiths a full debut in midfield and Renford Tenyue starting on the wing.

Chatham started strongly and were awarded an early penalty when Ites fullback Danny Smith pulled back Dan Bradshaw as he tried to meet a Jack Evans cross. Keeper Molloy guessed right but Evans placed the penalty well for 0-1.

Molloy was on top form and a flying finger tip save on 18 minutes denied Pilbeam a certain goal that was heading into the top corner. Molloy then saved a low drive from Lawal a few minutes later.

Despite the pressure Chatham were applying The Ites could have got level on 28 minutes – Griffiths hoofing a clearance high and long for Bennett to twist around the last defender but somehow he was adjudged to have committed a foul with only Newcombe in the Chats goal to beat. Griffiths also teed-up Hamill on 32 minutes with the Ites midfielder driving wide of Newcombe’s right post.

Molloy pulled out another spectacular flying save on 36 minutes to deny Luke Rooney  – Only for Chatham to score from the resulting corner when Charlie Dickens headed into the net for 2-0.

Half-time: Sheppey United 0 Chatham Town 2
Ernie Batten rolled his first change on 58 minutes, withdrawing midfielder Luke Griffiths in favour of forward James Jeffrey.  The Ites were now pushing much higher up the pitch and Chatham started to sit back more. Jonathan Pilbeam was booked for hauling down Tenyue on 61 minutes but the Ites didn’t capitalise on the free-kick that was awarded.
Another substitution then saw a change at left-back with Wilson replacing Smith. The Ites pressure was awarded on 70 minutes – Tenyue crossing from the right for Midson to knee past Newcombe at the far post for 1-2. The home side were on top now and a save by Newcombe from Roberts denied them an equaliser.
The last throw of the dice saw a change of wingers with Tenyue replaced for ex-Chatham wide man Michael Hagan – and he was involved straight away with a deep cross finding  fellow sub Wilson sliding forward to convert home at the far post for 2-2.
Molloy then saved a free kick on 85 minutes which proofed vital – with the Ites completing a fantastic turnaround a minute later. Billy Bennett hit a shot from outside the area which Newcombe fumbled – Midson could only hit the ball against the near post with Hagan then roofing into the net for 3-2! 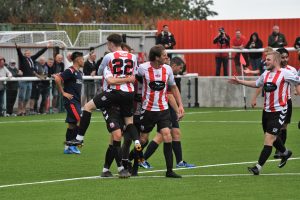 Next Story:
Man of the match v Hollands & Blair – Vote