SHEPPEY GET THE JOB WELLS DONE

Sheppey United kicked-off their 2021/22 season with a 3-1 win on the road against Tunbridge Wells, despite falling behind in the first minute.

Manager Ernie Batten’s first selection of the season sprung a few surprises. Not included in the 16 were a few of the summer recruitments such as Kane Phillip, whilst youngster Ryan Freeman earned his place in midfield after a solid pre-season. In goal, Adam Molloy started between the posts and centre-back Ashley Sains had to make do with a place on the bench.

The game was under a minute old when the hosts went 1-0 up after the ball came off Lex Allan and past Molloy. The early goal gave the Wells momentum with Sheppey struggling to get hold of the game in the opening 20 minutes. Good blocking by Lex Allan and Jahmal Howlett-Mundle helped protect the Ites during this period along with assured keeping by Molloy. At right-back, Dan Birch was showing signs of his intentions by breaking forward whenever possible and one run on 12 minutes created an opportunity for Tenyue which was blocked by a defender.

A block by Howlett-Mundle on 22 minutes led to a break by the Ites with Bennett forcing a corner – with Midson heading over the incoming cross. Five minutes later the Ites had a free-kick wide left of the box – the ball was worked to Smith whose shot led to a corner which was cleared away.

The Ites came desperately close on 31 minutes – A Roberts shot was pushed up in the air by keeper Lee-Wharton and the ball looked to fall into the net before it was hacked away off the line. A couple of minutes later Junior Aikhionbare showed the Ites were turning the screw when he hit the post. A few bookings followed for Wells, Johnson and Shadow both shown yellows.

The Ites finally got level on 40 minutes – Danny Smith getting forward to feed Aikhionbare who cut sharply inside and rifled a rocket of a shot past Lee-Wharton for 1-1! 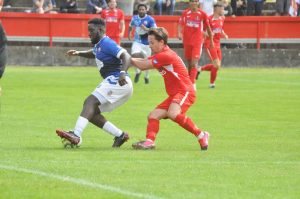 It was a great start for the Ites in the 2nd half – they scored on 48 minutes. Billy Bennett won a corner which was initially cleared. Taurean Roberts then received the ball back on the left flank and turned the right-back inside out before whipping a ball over for Tenyue to sweep into the net for 1-2!

Youngster Ryan Freeman was expressing forward at every opportunity and a clever one-two with Jack Midson  on 55 minutes almost created an opening for the local lad to get on the scoresheet. Billy Bennett was booked on 62 minutes and a few minutes later the Ites started to consider fresh legs.

James Jeffrey was introduced in place of Aikhionbare and he immediately showed his intentions by forcing a corner on 62 minutes which the Ites failed to benefit from.  With the thunder rumbling in the skies it was the Ites who struck next on 75 minutes – Jeffrey forcing a throw-in which found Birch pressing forward. The right back forced his way into the area to find Freeman who couldn’t get a shot away. With all shooting options closed down Freeman calmly knocked the ball to Roberts to hammer home for 1-3!

Roberts and Tenyue had been threats all game with their wide play supported by both full-backs and it was little surprise to see Roberts create another chance on 80 minutes – but his scurrying run and cross was unable to find a Sheppey head. 5 minutes later it was Tenyue and Birch linking-up with Birch hitting a low cross that Lee-Wharton got down well to gather.

The Ites introduced Ben Wilson and Richie Hamill to freshen things up on 86 minutes – and substitute James Jeffrey had an attempt blocked by a defender in the closing moments after Roberts set him up. 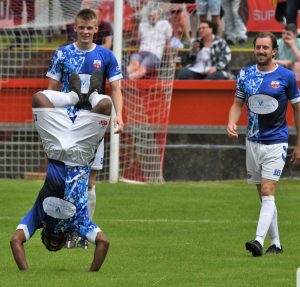 Soundcloud audio interviews were taken with:

Previous Story:
Man of the match vote: Tunbridge Wells (away)

Next Story:
JUNIOR GRABS THE ITES A POINT