Sheppey United’s social media presence has increased over the last six weeks. So we wanted to hear what it’s all about from our recently appointed Communications Director Lee Allen.

Lee was voted onto the SUFC committee this summer. One of his objectives is to continue the growth of what was already a good following on social media. Additionally he’s looking at ways of providing more information to its followers.

“The club already had good content to be honest. The team of Martin Eaves and Mike Wood covered games and essential information was always relayed to the supporters.

“Even today, they both support me with what I’m trying to do.  For instance, all of those eye catching graphics come from the creative wizardry of Martin. We then have Mike’s technical knowhow which is second to none. It’s all about helping each other and that’s one passion you can see from inside the club. Everyone wants success and will go out of their way where possible to keep the club on its exciting journey.

“Special thanks to Martin this week in particular. With all of the player announcements we’ve done recently it’s been very busy. I’ve put quite a few requests into him for some graphics and he’s always turned them around” Lee added.

When Lee was asked about what he focused on initially he said: “My background included supporting the Invicta Dynamos (ice hockey) social media. Part of that would normally see me do on average 60 to 70 tweets per game with updates! So for me, that was a quick win to implement with the Ites. We’re now more or less supplying match commentary in text form across all games. I see that as a way of helping fans who can’t be at games to picture how a game is going – after all and as we all know, a final score line may not quite reflect how a game was played.

“Another instant win was introducing audio (SoundCloud) interviews after games. I mentioned this to Matt Smith and Marcel Nimani during my early days in the role and got the green light. Some fans may not speak to the management team or the players, so I’m trying to use this as a way of building a bridge. Marcel has been great in helping with this – We agree who to interview and he’s always got it sorted for me.

“The players seem to enjoy doing it too. Once the season starts properly we’ll be looking to go into more game detail, especially with Ernie and the coaching staff.

“Ernie must trust me with it…..he’s done three in a matter of weeks so it’s good to build that relationship. It does seem weird interviewing the manager. One of my early childhood memories was my dad and I regularly watching him play at the old Botany Road stadium in the 1980’s”

We then asked Lee if the social media followers have increased this summer. “Yes, Facebook has seen an increase of over 50, Twitter by the best part of 100. We’ve also launched Instagram and LinkedIn, slowly but surely we hope to increase our presence on those platforms too. When fans comment or share our posts hopefully it will attract more followers.

“We are now putting all home games on Facebook as ‘events’ so fans can now invite their friends to the event (or share it). Hopefully these friends will then book tickets and come to a game or two. Twitter went over 4500 followers at the weekend which was a great milestone to pass.

“Lastly, there is a lot more content going on the website too now and the hits on the site are on the up” he replied.

So what else is on the list Lee? “Well, I’ve added match reports. I must admit they’re not massively long but like everyone else at the Club, I need to manage my time a bit. That includes work, family and outside interests too.  I’m also continuing my consecutive running streak of plodding the streets and fields every day since 31st December 2016. I think the match reports cover the basics, certainly for now anyway, even these can take up to 30 minutes.

“I talk to Marcel more-or-less everyday about things we can do. Some of those things have happened already like releasing photos of the players training, which we’ll do again in the season. We’ve also done the transfer news and articles on the coaching staff.

“In the last week I’ve lost count on the amount of messages/calls we’ve exchanged before the player announcement day. I’m sure it was worth it, we wanted to do it a bit different this time. I hope our supporters enjoyed the videos, pictures and content.

“I contact Jack Midson every now and again. With the academy being new, it’s important to keep promoting it. I’m also in regular contact with Gary Seamark – of whom we hope to do a feature on before we play our first game on the new 3G pitch.

“There are other things in the pipeline/thoughts of thinking. Over the coming season I hope the supporters will see what we’re trying to do. Ten years ago social media didn’t really play a part in football, especially at this level but now it’s part of everyday expectations.

“We’re always looking at ways to be a bit different or be at the front compared to fellow clubs.  By having information coming directly out of the clubs own media it also helps reduce the risk of anyone getting misquoted or wrong information being put out to the public. Engagement with fans and potential new customers/followers is an important element of the clubs function and growth.”

Our last question to Lee was to let us know who his favourite player is and the best game he’s watched. “That’s a tough one to answer. I respect every player that wears the shirt and they all bring different qualities to the team. For instance, Dan Birch will run through a brick wall and will always go nose to nose with an opponent. You have the creative ability of Richie Hamill, Billy Bennett. And then of course the way Jack Midson reads the game and makes finishing look so easy is unbelievable. I’m glad Junior is confirmed as returning now as well. He turned a few games for us last year with his pace and power.

“I like the new recruits too. Sains, Smith and Wilson add experience, stability and are all winners with previous clubs. Fitzgerald has a good engine and has impressed in midfield. Wingers Hagan, Phillip and Roberts give you pace, tricky and contributions to goals. You then have young Liam Northwood in goal who has had a good football upbringing at Charlton and Arsenal academies. Striker James Jeffrey really impressed me and I can’t wait to see him link-up with Jack.

“So no, there’s no favourite for me, I like them all from 1 to 11. My dog who passed away a few years ago was called ‘Lex’ so I guess Lex Allan has a special bond given my surname is Allen!

“As for games – that has to be Corinithan away last season. To be losing heading into injury time but win 4-3 in the dying seconds meant you went from feeling flat to jumping with joy within minutes. I also remember many moons ago the Tommy Sampson years and there were many good games back then too. Hopefully we have so many to choose from during the 2021/2022 season” Lee replied.

To finish-up, we spoke to Marcel about the club’s social media: “Our social media accounts have taken off massively. It’s a real credit to Lee and also the support he gets from Martin Eaves and Mike Wood.

“His passion for the job, as well as his ability to present information to our fans is one of his strengths. Lee has become a popular member amongst the players and staff. I look forward to working with him on other initiatives that we’re discussing”. 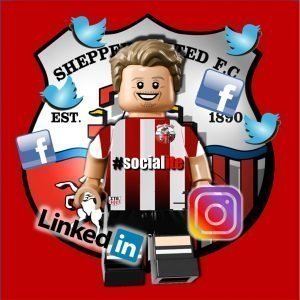 Next Story:
JAHMAL HOWLETT-MUNDLE: ITS THE RIGHT TIME