Getting to know: Josh Hall

Our latest episode on the Ites coaching staff features First Team Coach Josh Hall. Josh has had experience with other Kent sides at various levels which provides useful input to his role with Sheppey United. 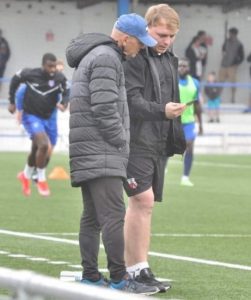 Josh started his coaching career at the young age 16 as he much preferred that to playing.  “I’ve been around grassroots, academy, post 16 and senior team environments. My first serious role was with Dover Athletic in their academy for a placement year. I then moved onto Dover 16’s before moving to Sittingbourne 1st team as the first team coach. Most recently I was the Joint Manager of Canterbury City before accepting an invitation to join Sheppey United as First Team Coach.” Josh added.

When quizzed on his biggest achievements in football, Josh had a few. “After taking on the Canterbury role with the current manager we had to put together a team within four days that needed to compete and keep City away from the drop. It was a big achievement given the circumstances. Secondly, being involved and coaching some fantastic players – Seeing them move on to higher league and professional league clubs. I haven’t managed to win a senior cup/league yet so hopefully that comes this season! The FA Cup run last season was by far the most exciting.” Josh said with a smile on his face.

For Josh, Sheppey was always seen as the go-to club and couldn’t wait to get involved. “The facilities are superb, the gaffa wants his teams to play an attractive way and the resources available such as performance analysis, GPS and nutrition really compliment the playing philosophy. Having said that, a funny moment was my initiation song when I joined, it was absolutely awful. I went in so confident and forgot how the song started. It ended up being a little Capella with a few of the boys helping me out with the backing music.”

Outside of his role at Sheppey Josh is a primary school PE teacher and his hobbies usually involve spending time with his fiancée and close friends – he also loves a bit of golf.

Our final question to Josh was to describe his favourite moments at the club so far, and how well he gets on with the lads. “I have a few great memories, I think when we played Balham at home and Warren Mfula scored the winner with a few minutes to go, was my first moment that I really enjoyed. The FA Cup run last season was exciting and the Jack Midson winning goal against Corinthians are my top 3. The lads are all fantastic. I’ve been with Lex Allan before at Sittingbourne where we got on quite well and Jahmal is one of the nicest guys I’ve met since joining the club.

Next Story:
FROM THE DUGOUT – MARCEL NIMANI