Not only was it one of the hottest days of the year being one factor to contend with, the Ites also arrived to the stadium whilst the pitch was still being cut from considerable growth. A difficult surface was to give both sides problems in what was another encounter for Sheppey against higher league opposition. The Ites took to the field without the services of Lex Allan, Jahmal Howlett-Mundle and goalkeeper Adam Molloy.

As early as the 4th minute Ites had their first opportunity of the game but Billy Bennett’s free-kick was hit over the crossbar. Ten minutes later Ites’ keeper Liam Northwood got down quickly to push the ball out for a corner – which came to nothing. The away side fielded two trialists on each wing and #7 made a darting run from the right-hand side into the edge of the box but hit his shot off target. On the opposite flank, trialist #11 was catching the eye with his quick feet and trickery.

Sheppey then gained the lead on 26 minutes, the ball was worked to Jack Midson who despite a defender on his shoulder calmly placed his shot beyond the Faversham keeper for 1-0. Faversham put pressure on the Ites’ goal ten minutes later – A long throw was headed out by trialist #8 for a corner in which the subsequent cross was punched out by Northwood. A bursting run by Ben Wilson from right back forced at corner on 41 minutes with Richie Hamill finding the head of Midson but his header was well saved.

A blow to the Ites came seconds before the halftime whistle – Faversham captain Harry Harding equalising.

Trialist #11 came desperately close to scoring on 54 minutes, a shot aimed for the corner of the goal produced a great save. Faversham were made to pay for a missed opportunity on 72 minutes when Sheppey went on to score –  Trialist #11 involved again as Billy Bennett pulled wide of the keeper to slot home for 2-1.

Bennett then fired just wide on 77 minutes and a moment later a great save by Northwood diving to his left prevented what looked like a certain equaliser for Faversham. The young keeper was in the thick of the action 5 minutes later with Faversham on the attack, Northwood raced out and conceded a free kick – which was cleared away by the Ites.

Trialist #11 was substituted with little than 10 minutes remaining – with Ites’ fans chanting for Ernie to “sign him up”.

With the game closing out Sheppey forced 3 consecutive corners – With the final one falling to trialist #14 who was denied by the keeper before Meziane blasted over.

Soundcloud audio interviews after the game were taken with the following: 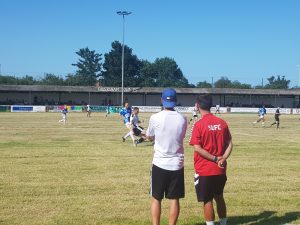