An experimental Sheppey United team fell just short away to a Margate side placed a couple of divisions higher on Saturday. The Ites were playing their second game in three days so made many changes, which included the call-up of youth team players Jack Marsh and Bailey Catherick as well as goalkeeper Alfie Irvine – there were also four trialists starting for the travelling side. 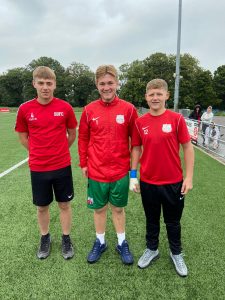 Margate took the lead early into the game, their left back crossing low into the Ites box in which Lex Allan cleared for a corner – Dan Thompson’s attempt from the resulting cross deflected off an Ites player and beyond keeper Liam Northwood on the 8th minute mark for 1-0. Northwood was called into action a couple of minutes later, pushing a shot out for a Margate corner.

Catching the eye for Sheppey was trialist #11 who worked hard up-top for the Ites and in the 21st minute Billy Bennett attempted to cut a pass into the penalty area but it fell fractionally too far in front of the trialist. The duo linked-up again on 23 minutes, Bennett’s forward pass to the trialist just a second out of time with Ites #11 flagged offside. Roles were reversed a couple of minutes later, trialist #11 finding Bennett this time who’s cross was knocked out for a corner which Margate successfully dealt with.

On 27 minutes, a Dan Birch clearance found trialist #11 and he forced Margate to concede another corner – which they cleared and tried to break forward, only for a great recovery tackle from Howlett-Mundle to save the Ites from potentially getting caught short.

On the half hour mark Sheppey scored to make it 1-1!  Trialist #3 knocking the ball forward and trialist #11 calmly lobbing the keeper for his second goal in two games. He almost doubled the lead moments later, whilst at the opposite end, Margate’s #9 spun his marker on the Sheppey semi-circle and curled a shot just wide of the far post.

For the restart Sheppey introduced Tarik Ibrahim into the action, replacing trialist #3. Billy Bennett saw plenty of the ball for Sheppey as he tried to link-up play between midfield and attack and despite good pressure by the Ites they fell behind in the 51st minute – Dan Thompson with a well-placed shot beyond Northwood for 2-1.

Sheppey had a free-kick on the hour after Tarik Ibrahim was bundled over – Billy Bennett forcing the keeper to push the kick out for a corner. Ryan Freeman was then found in the Margate box, his shot was parried by the keeper and a defender cleared the ball away from the line. Dan Birch was down injured for the Ites on 68 minutes, but the popular right back was soon back on his feet following treatment. With 78 on the clock a great tackle by Howlett-Mundle was needed to knock the ball out for a Margate corner – which Northwood had to be alert and save an incoming shot from outside the box after Sheppey only partially cleared the cross.

A proud moment for Sheppey was introducing both Jack Marsh and Bailey Catherick for the final five minutes.

Sheppey may have lost 2-1, but they can take great pride from the performance.

Soundcloud audio interviews after the game were taken with the following players. 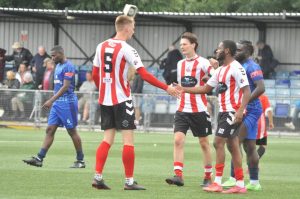 Next Story:
Sheppey defeated at Maidstone