Getting to Know – Charlie Himbury 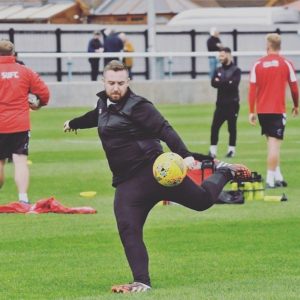 Our second episode of ’Getting to Know’ concentrates on goalkeeper coach Charlie Himbury, who has been part of the set-up at the Ites for a few years now. Charlie is a popular figure amongst both the playing and coaching staff and he was delighted to have shared his story with us.

Charlie started playing between the sticks within various levels of the non-League football pyramid at the age of 16. Playing up to Step 3 level, he represented clubs such as Cray Wanderers and Thamesmead Town.  His playing career however was cut short due to family and work commitments, with the last club he represented being K Sports.  Charlie was still keen to be involved in what he describes as the ‘beautiful game’ and was soon in a new capacity as a goalkeeper coach.

After leaving K Sports in November 2018, Charlie was approached by the Ites first team coach at the time (Sonny Gladish) to come over to the Island and have a chat with Ernie Batten about becoming goalkeeper coach – Something Charlie describes as an opportunity which was a huge one for him to join such a great club like Sheppey United and kick-on with his coaching career – and he hasn’t looked back since. 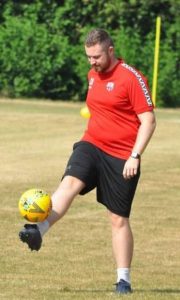 Outside of football Charlie works for an Austrian oil company as a Specialist Derivatives Analyst.  When asked what his greatest achievement was in life he said with pride it was the birth of his two daughters, Bella-Mae and Lola. He was also a keen cricketer in his younger years, playing as an all-rounder at Bearsted CC.

Quite naturally, Charlie has a special bond with all of the goalkeepers he works with. But similar to fellow coach Mike King, he made special praise for Billy Bennett too. The pair have been at a couple of clubs together and have built-up some fond memories as well as a great friendship.

Lastly, when asked what his greatest moment was at the Ites (so far), Charlie had two – The 2-0 FA Cup win against Welling United and the 4-3 win versus Corinthians where the Ites grabbed victory late in injury time….I’m sure most Ites fans are split between those two games as well to be fair!

Thanks for all you do Charlie, we look forward to see you soon.

Next Story:
Club progressing on and off the field