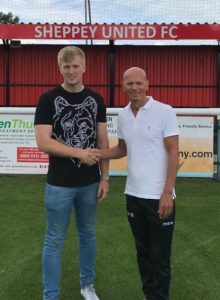 SUFC are delighted to announce the capture of Ollie Brown

Sheppey United are pleased to announce that 23 year old defensive midfielder Ollie Brown will be playing at the Havill Stadium | Holm Park next season.

We caught up with Ollie and here’s what the former Sittingbourne player, with 300 Ryman games under his belt, had to say:

Welcome to Sheppey United Football Club – How does it feel to move to the Ites?

Last season I started off at Sittingbourne where we had a very good start but unfortunately I got injured but now I’m back and looking forward to the season ahead. Previous other clubs include Whitstable, Maidstone and Canterbury.

I’m very pleased to get the deal done, it’s a great club with a big fan Base who want to progress over the coming years to which I’m excited for.

Talk us through how the talks and move happened?

I’ve been speaking to Nick over the last couple of weeks and he was saying how impressed he was with the facilities and infrastructure and how he thought I’d be a great fit for the club. so we arranged a meeting at the club and the rest is history.

How would you describe your own game?

I’d describe my own game as me being a calm ball playing midfielder who can also put a tackle in and who also can cover in other positions.

How much do you know about Sheppey United?

I know quite a bit about the club as I’m a local lad, and can’t wait to be a part of the project.

What makes the club appealing to you?

The ambition of the club makes it appealing, the management have assembled a strong squad for this year and everyone associated is looking forward to what the season will hold.

Do you know anyone from the current squad?

Yes I know a few of the current Sheppey players, I’ve played with Girty, Jono, Brunty and a few of the others previously I know that we will be strong and competing this year.

What are your biggest aims for your time with Sheppey?

My biggest aim is to be competing for the title come the end of the year, also I’d like to have a good run in the fa vase as playing in the Bostick hasn’t allowed me to do so yet in my career.

Finally, what is your message to SUFC supporters?

My message to the supporters will be to support the lads through the good and the bad spells and I’m sure come the end of the season we won’t be very far away from where we want to be.

“He will bring great qualities to our squad. He has great experience with 300 appearances in the league above, but at 23, he still has his best years ahead of him. I’m looking forward to working with Ollie.”