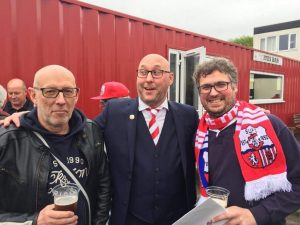 The last game of the season against Tunbridge Wells was always going to be a special occasion at Holm Park.

Boasting the two best supported teams in the league and a chance to thank the lads for their efforts on and off the field.

Whilst it wasn’t a Stella performance on the field, a Hangover from heroics at Crowborough two days before, the attendance was boosted by an unlikely contingent from a small village in Belgium…. this is their story.

Dimitri and Gégé had been following the Ites from afar via the SCEFL Facebook page so they decided to come over and see what all the fuss was about.

After noticing Dimitri’s request for “Any good pubs on the Island?” on the SCEFL page earlier in the week, I contacted him and invited him to join the Paddock for the day.

The pair embarked on a Birkin-esque five hour trip to Sheppey via Dover. We met up in the Harps Inn.

My first question: Why come all this way to watch Sheppey United?

“My Gillingham friends, Adrian and Nigel talked to me about Non League Football in Kent. Then I followed it on a facebook group and discovered the brilliant posters of Martin Eaves, a supporter of Sheppey united FC, the only club in Kent on an Island! I decided to go to Sheppey United FC for the last match of the season.  My friend came with me (Gégé is not really a football fan but likes pubs and good atmospheres like we found in Sheppey United FC).”

I asked him what his favourite Ites poster was.

“Difficult to choose, the one with the Gallagher brothers for the final at the Gallagher Stadium, the poster for Chatham with the fat woman (Vicky Pollard from Little Britain) made me laugh! We saw people like her in Sheerness, lol!” (There must have been a shopping trip in town, from Chatham).

Do you support a team in Belgium?

“In Belgian football, I support Royal Olympic Club Charleroi 1912 called the Mastiffs. Olympic play in step four of the Belgian league and have qualified for the play-offs.  Olympic finished second of the first division in 1946-1947 just behind Anderlecht who won the first title of their 30 titles.”

How was your trip?

“We set off at 7am from Charleroi and drove to Calais to take the ferry and we were on the Sheppey bridge leading to the island at midday. We then finally met the  Sheppey United FC best supporters at the Harps Inn at Minster, they welcomed us as special guests, what an honour for the little Belgians!”

What do you think of the Havill Stadium?

“At 2:30pm we arrived at the Havill Stadium where our new friends offered us the entrance tickets.  We met the Chairman and the Commercial Manager who invited us to the board room and offered us some programmes and a book about the history of the club.”

What did you think of the game?

“We were lucky enough to see the match in the Paddock, the heart of Sheppey United FC.  The level of football was very appreciable. The star of the team, Dan Bradshaw open the score after 6 min but Perry Spackman heads home in the 31st minute to make 1-1. Ollie Spackman makes it 2-1 to Tunbridge Wells in the 94th minutes.  The Ites deserved a draw or more for their good second half.  But only goals count in fooball.”

Did you have a safe trip home?

“After sharing some beers with Calvin, Rich, Andy, Jack, Rob, John, Paul & Martin, … we left this marvellous club to tour the Island.

Before taking the ferry at Dover, we ate Oysters and appreciated Kentish wine in Whitstable. We arrived in Calais after midnight and back home at 3am on Sunday morning with a lot of good memories !”

Dimitri and Gégé were clearly taken by our enthusiasm for our team and were amazed at the set up at Holm Park – which hopefully they didn’t find too Ostend-tatious.

I then asked him the big question. Do you consider yourselves Ites now?

“Gégé and me are definitely Ites! We will now follow the White and Red Stripes! Thank you for the warm welcome. We spent an excellent day with nice people, we will come back!”

Anyway – that’s enough Belgian waffle, hopefully we will see them back at Holm Park very soon.