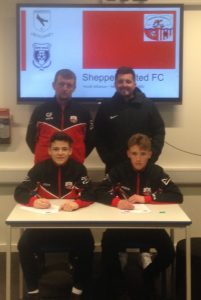 The club are pleased to confirm midfield player Ryan Freeman and Striker Alfie Bates are the first youth team prospects to sign senior registration forms with The Ites.

Freeman and Bates have both signed following their good form over the course of the season with the U16’s and following recent training sessions it was decided to reward the boys by signing the duo. Bates has recently made his full first-team debut when coming on as a late substitute against Deal on March 27th. While Freeman was also involved in the match-day squad.

The duo have been key figures in the under-16s this season and have been part of the club since the Youth Section was established in 2016. Director of Youth Zach Foster-Crouch has said ”We are extremely proud of the pair and we are pleased to reward them with the chance of being involved in senior football, when myself and Matt (Smith) first sat down and spoke in January 2016 we had predicted this first happening in three years-time so around 2019 at some point, so for us to be almost a year ahead of where we was projected it’s a testament to everyone’s hard work from the players, coaches, volunteers and committee members.”

“From next season the Youth Section of the club will have five age groups from U13-U18 as well as a Scholarship Program @ The Oasis Academy so we will have around 100 players in the youth section of the club next season. We have big plans at the club to ensure it becomes the HUB of youth football in Kent and the success on Tuesday shows a pathway for young, local footballers.”

Sheppey United Youth will shortly be releasing trial-dates for all age groups.