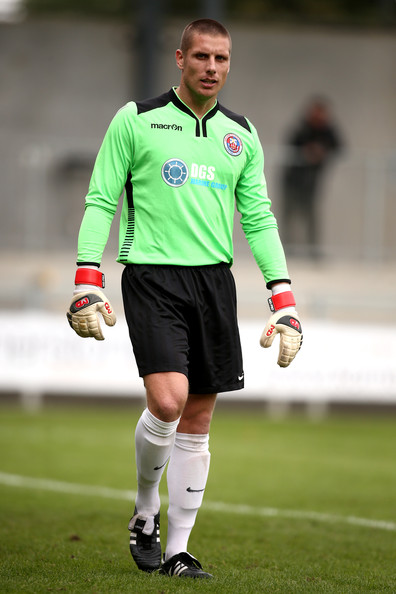 Sheppey United are pleased to have signed experienced goalkeeper Craig Holloway. The former Arsenal trainee, 33, had this to say:
“When I spoke to Ernie he explained how the club had developed over the last couple of years etc. and told me the ambition of where the club wants to work up the non-league pyramid. Obviously I’ve done my research as well. The club has a good history and to see home gates of 300 to 400 on average is a fantastic testament to all involved. So to get that at Step 5 is fantastic. So I’m sure if the club continues in the direction they are now, before long the club will be hitting 1000 people with success. Remember football clubs are built around the fans and all the volunteers. I’m looking forward to being part of Sheppey’s future sucess.”

Craig started his career at Arsenal progressing through their scholarship programme and the Reserve team to take his place on the bench for a Champions League match in Valencia.
He then joined Farnborough Town in the Conference and after playing in the first 27 games of the season he joined Southend United on loan.
Gravesend & Northfleet then paid a transfer fee for his services and whilst playing in the Conference National for the Fleet he sustained a serious cruciate ligament injury that kept him out of action for 18 months.
He then moved on to Braintree where he was Player of the Year. He has also played for Chelmsford, Bromley, Thurrock, Welling and Margate.
He made the Conference South Play-offs with both Braintree and Welling United – playing for the latter in the Play-off Final at Dartford. At Margate he was joint caretaker manager with Simon Osborne after Chris Kinnear moved to Dover in the 2012/13 season.
The Margate team reached the end of season Play-offs and Craig and Simon took over as joint managers for the next season until Terry Brown was appointed by new owners at the club.
Craig then moved to Dartford on loan towards the end of 2013/14 Season.
He then joined Greenwich Borough during when released by Dartford.
His most recent club is Sevenoaks Town.

Previous Story:
Commercial Update
Next Story:
Geoff – On the Record (Croydon Away)