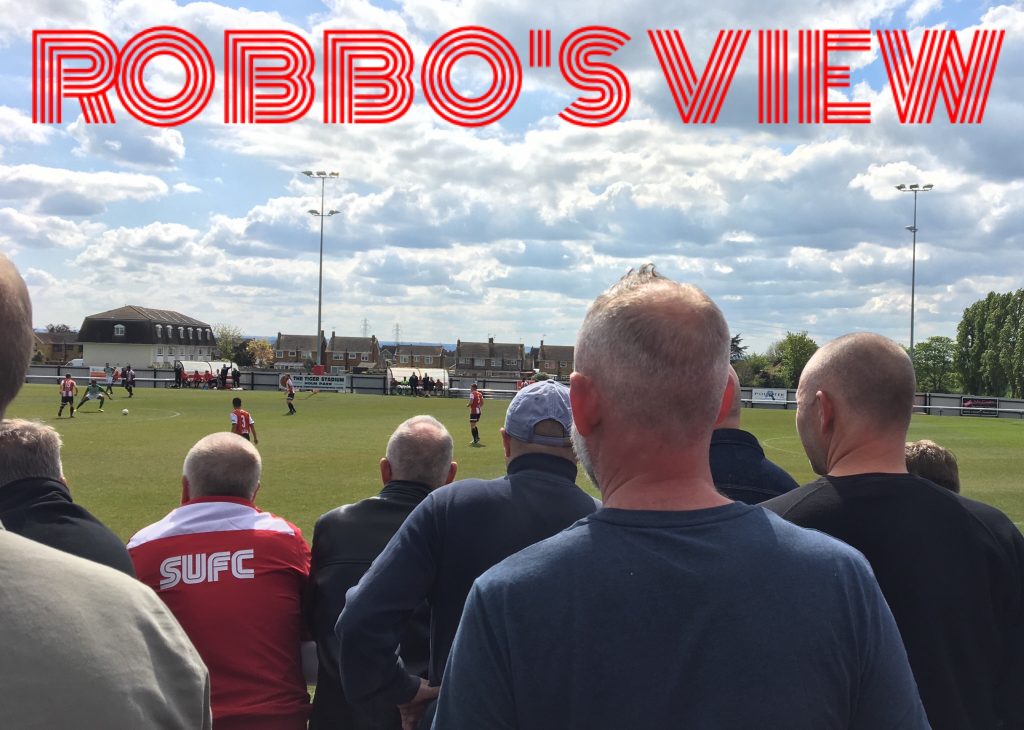 So, what do I know about Glebe, hmmmmm not very much, hanging around the middle of the table whilst our own heroes were in the midst of an incredible run, flirting with the top of the table like John Terry at the Christmas party. On paper Glebe would go one up kicking Sheppey up the proverbial backside who then storm back and win easily.

Big news was that Sheppey had lost another keeper, Stephen Lawrence returning to Rusthall after his prolific run of two games so in comes local lad Tom Benham to become Sheppeys 17th keeper of the season, surely some kind of record having used more keepers than outfield players. Hiccham again drops to the bench with Timmy and our friend from the North being restored to the starting line up.

The game started and just to throw my expectations Sheppey were at Glebe’s throats like a Staffordshire bull terrier with an elastic band round his testicles, Tom Bradshaw who seemingly wanted to make up for the lost time he’d spent on the bench looking like he’d overdosed on E numbers meaning that the visitors had less time to settle than a Gypsy family at the local park.

Ten minutes in the relentless pressure paid off, a silky move finds Trey in the box, as he shapes to shoot a tackle comes in upending our little bag of tricks, penalty. Up steps Bradshaw in confident mood and strikes it past the keeper into the net 1-0. Obviously now our intrepid heroes would put Glebe to the sword showing no mercy, but then again this is Sheppey, we like the drama, we weren’t to be disappointed.

15 minutes later Glebe had the audacity to equalise, a smart shot from Dan Gunner who rifled it in the net. A minor setback we all said and indeed it was for a whole minute when uncharacteristically bad defending let in Max Fitzgerald to score with ease 1-2. At this point I was starting to doubt the John Smiths I was drinking that had courageously carried the Ites on this run but I took one for the team and carried on drinking it with gusto.

Sheppey, somewhat stunned by this again took the game to the visitors with all the tenacity of a Glasweigan at opening time, Remell testing the keeper, Trey performing more tricks than Cynthia Payne and the midfield of Puppet master, Timmy And Jack well on top.  Just at this time their centre forward Zepo, the missing Marx brother started giving the paddock end a bit of good natured ” banter” holding three fingers up telling us the score safe in the knowledge his team would hold out for the victory so imagine how clever he looked when his mates gave away a free kick 25 yards out just before HT, up steps the captain, curled it round the wall that Donald Trump would be proud of and into the bottom corner, the keeper given less chance than a successful application form from the D.S.S stand clearly rueing his mates comedy banter with the crowd.

HT 2-2, a good game for the neutral if only there were any there but we’ve been here before many times this season and as I’ve previously stated these were the type of games we threw away last season and ended up with more drawers than Victoria’s secrets.

Second half underway, like the team I was feeling refreshed having visited the “gents” telephone box and managing to hold my breath for the entire performance I now had a spring in my step and noticeably less John Smiths in my body. 3 minutes in to the second half Trey again finds himself with more alone than a 16 year old Emo and places the ball wide of the keeper 3-2.

“Zepo Zepo what’s the score” rang out from the Paddock, made all the sweeter by his sheepish grin and the promise he’d score ” in a couple of minutes”. 4 minutes later another sweeping move ended up with the Shrewsbury shifter having a chance that was easier than an Island girl on alcopops, 4-2 and Dans second of the night. By now Glebe were starting to look more vulnerable than a Cub Scout on Jim’ll Fix it and we’re putting up about as much fight, on 68 minutes another penalty to the hosts, up steps Tom Bradshaw again who again found the net with ease 5-2 and a hat trick for our dashing forward, Glebe looked more beaten than Geoff Boycotts wife so surely they there could be no complaints if Sheppey got a sixth which they duly did again through Bradshaw who as the song says wax truly on fire. Meanwhile while this was going on the keeper and his defence had been more unused than Jurgen Klopps toothbrush but in truth were never under threat the second half.

Just time for Ernie to rotate the Battens and give Hiccham a run for LHO, a few more chances came and went but the game was won.

Again Sheppeys fitness tells its own story, with the Colonel on the mend and young Coops and Kwasi still to come the squad has plenty of depth and with the wealth of talent upfront it’s no suprise we’ve scored 50 odd goals. Young Benham in goal looks decent enough, I’ve said this several times this season, so hopefully he will stick around for a bit.

Again a decent crowd of 277 but with the style of football on offer and the genuine chance of us pushing for promotion I’d  like to see the crowds topping 300.

MOM – Tom/Dan Bradshaw, work rate and the potency in front of goal mean there won’t be many people who score more than him in this league.