Ernie adds Will Graham to the coaching staff

Sheppey United Manager Ernie Batten has appointed 31 year old Will Graham as First Team Coach, here’s what we know about Will: 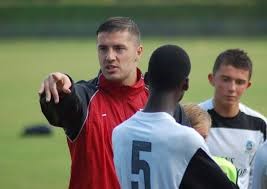 We caught up with Will and he gave us this brief background into his football career to date.

“After working at Dover Athletic & Margate FC with successful youth programs, I was offered my first stint as first team coach under previous managers Jim and Danny Ward at Whitstable Town FC. In the most successful Ryman season ever for Whitstable Town saw Jim and Danny move back to Ramsgate FC however due to the hard work put in by myself I was offered the position as Manager at the club. After a tough start and several disagreements with chairman Gary Johnson about the direction the club was going both parties agreed to part ways. Within weeks of leaving Whitstable Town, Hythe Town Manager Clive Cook approached myself about coming in and In our first season we reached the playoffs eventually losing too the eventual winners Worthing. The second season saw me promoted too Assistant Manager at Hythe Town. However I successfully passed my Prison Officer training and due to the time restraints and focus on my career as an officer I decided to step down in January at Hythe and focus on my new position.”

“This summer I have had several offers to come back into the game from conference, Ryman premier and Ryman south clubs and all was really appealing however due to various reasons wasn’t going to work for either parties. I was approached by new signing Luke Girt who I worked with at Whitstable Town and he mentioned the club was looking for someone to come on board. I have had several meetings about coming on board with Ernie etc and the plans for the club is fantastic and I do not look at this as a backwards step in my career as I believe the club is going places and I want to be apart of that.”

“I am really excited about joining the club and working as part of the management team with a forward thinking club.”

Thanks Will! Welcome to the club