Sheppey United Get Their Kit Off! 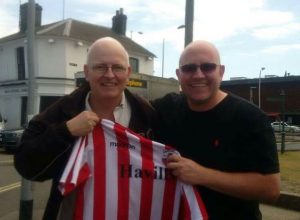 Sheppey United Get Their Kit Off!

Sheppey United FC are thrilled to back the Kit Aid charity which is a charity that recycles once loved football kits and distributes to underprivileged children and adults in some of the world’s poorest countries.

Non-League football fan Julian Chenery has been up and down the country collecting kits from hundreds of football clubs to help the project for many years now. “I saw Julian had been doing some advertising on Facebook asking if anyone had any old kits for the charity. I knew we had the remainder of last season’s kit and also quite a few kit bags full of old SUFC Kits at the club and got in touch with him” said Paul Rogers – Commercial Manager.

“I never realised just how much stuff we had. There must have been 5 or 6 complete kits along with old training bibs and some tracksuits. What struck me was Julian’s passion. Julian was coming to the club to collect everything I had bagged up and it was only on an email that I realised Julian doesn’t drive and would be making the journey over to the Island by train (from Croydon) and then buses. He would then have to cart all the heavy bags back on his own and out of his own pocket! – that shows you just how much this great charity means to him”

“We eventually arranged to meet at Sittingbourne station as he had arranged some other pick-ups in the area. We had a chat about the charity and how the old kits will go children in Africa. The children love any football kit and brings the local community and schools together and that’s exactly what our football club is about “from the community – for the community” it’s a perfect fit”.

Julian will keep the club and in turn we will keep our fans updated hopefully with some pictures of the children and young adults wearing the famous Ite’s shirts with pride. You can get more information on the charity at www.kitaid.net