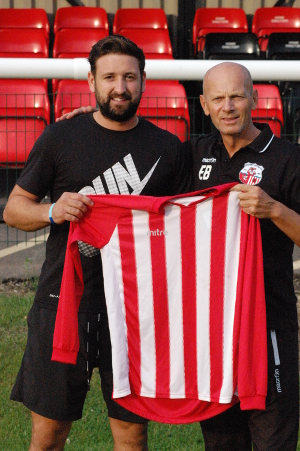 We are delighted to announce the signing of prolific striker Stuart King. Stuart was part of the Whitstable Town side that won them promotion to the Ryman League in 2007, scoring 30 goals along the way before moving on to Herne Bay. He has also had spells with Folkestone Invicta, Maidstone United and Faversham Town. Stuart netted an incredible 44 goals in 47 games for Folkestone earning his legendary status at Cheriton Road.

King is the 5th arrival at The Havill Stadium this summer following Jordan Carey, Hicham Akhazzan, Tom Brunt and Luke Girt in the clubs quest to climb the SCEFL table.

Manager Ernie Batten had this to say about his new Forward:

“With Richard Atkins departure, we needed to strengthen up front and we have brought in another proven striker in King who has bags of experience from the league above. His goal tally speaks for itself, he can score bundles of goals. King’s experience will help bring on some of the younger lads in the squad as well.”

Can Stuart be the King of Holm Park? We can’t wait to see!